Travel to Tanzania and Arusha

Travel to Tanzania and Arusha

Travelling to Tanzania is not easy. We flew from London with Qatar Airlines with a transfer in Doha onto a flight to Arusha. That seemed the best route from Europe. One advantage of going from Europe is that the time zone is more or less the same, so there is no problem with jet lag. It took 12 hours in two six-hour legs. This is Doha Airport, a big hub. 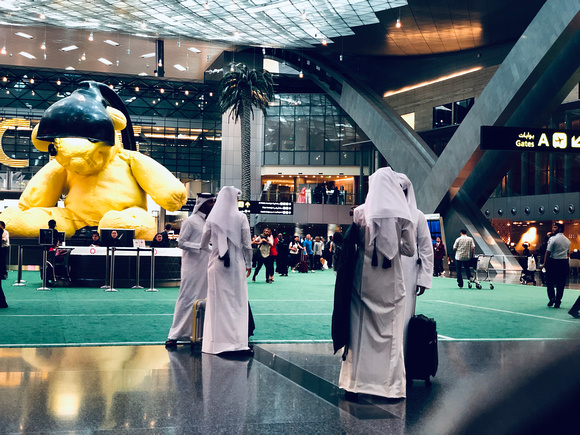 Qatar Airlines was very comfortable on the first leg. The lounge was excellent. On the second leg, however, we had a smaller, older plane without the flat bed seat - the whole point of booking business class. Due to me having to use a wheelchair in airports, we arrived last on the plane, a departure from the normal rule. The hostess was flustered because everyone had piled their luggage into the overhead lockers for our class - there was no room for our bags, even though we had paid extra. The hostess told me to put my cabin baggage at my feet for take-off which is most irregular. It was highly uncomfortable for my bad knee, twisted as it was by the luggage arranged around my legs for six hours. 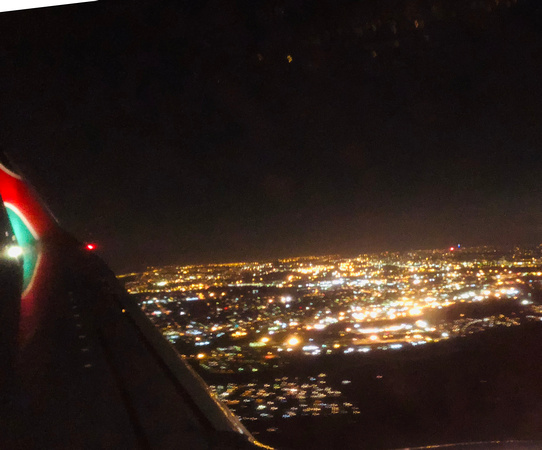 This phone photo is of a Kenya Airways plane over Johannesburg as our daughter struggled to come to Tanzania from New Zealand.

She flew from New Zealand to Perth; then Jobannesburg; then Nairobi; and finally Arusha. It took two solid days, counting wait times in airports. Her connection from Johannesburg to Nairobi was running late. To add insult to injury, at Nairobi airport she was required to fill out a visa for entering Kenya and hand over the money, even though she was in transit. She was beside herself standing in the queue, thinking she would miss her plane to Arusha, but a kind airport employee helped her get through in the nick of time.

When we travelled back to Australia we returned to Johannesburg and from there took a direct flight to Sydney, an eleven hour flight.

The following phone photo is of the airport at Arusha for small aircraft - I neglected to take a photo in the midst of the confusion at Arusha International Airport. Both were chaotic in their own way, but the crowds were much greater and the queues far longer at the International Aiport. 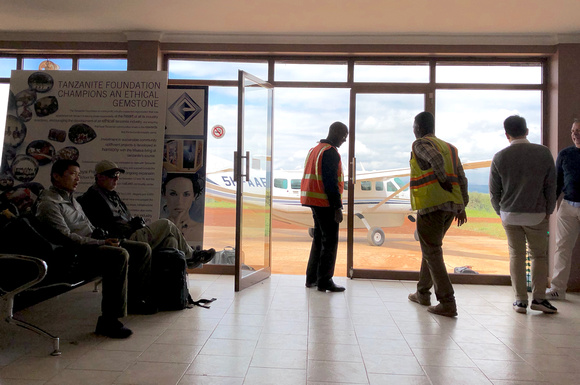 Be aware that arriving at Arusha airport is chaotic and very taxing for people who have been flying for a long time. First, there is a bunfight lining up to get a visa and filling out the forms, which are not handed out on the aircraft and must be done after you all spill off the plane. The prize goes to the fleet of foot, and I am definitely not in that category. Second, there is a very long wait to go through customs with said visa and all the other documentation plus fingerprinting and sometimes an eye scan. Only one lady in customs seemed to know what she was doing. Following all that, another scrum to get our bags which had been dumped in piles as we tussled with customs. Then, just when we thought our ordeal was finally over, our bags all had to be X-Rayed. Tempers frayed and someone was heard to say irritably that it was a lot to go through to enter a flyspeck at the arse end of the world! 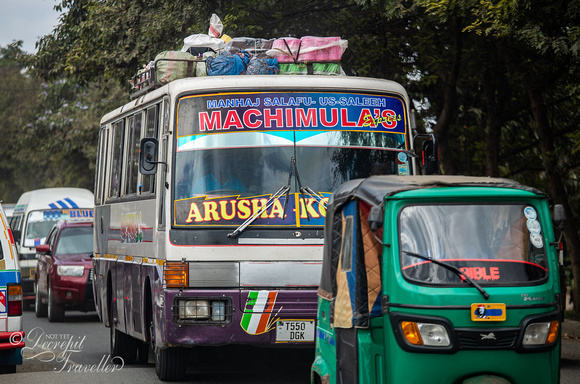 We drove for ages on narrow roads, giving way to many a crazy truck driver, minibus, or other rickety forms of transport. 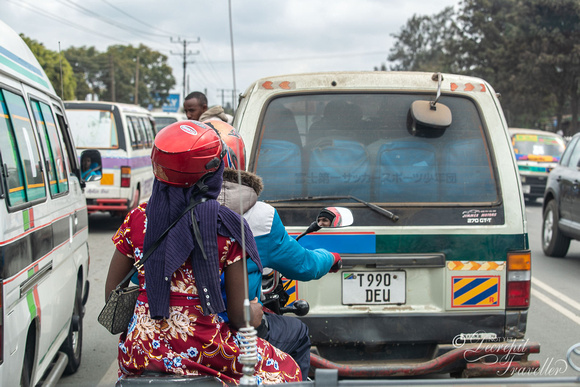 We went on to Katambuga Guest House, which is set in coffee estates outside of town. 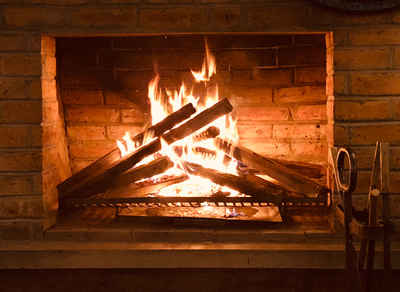 We were greeted by a warm fire and painstakingly prepared food - a winning combination! 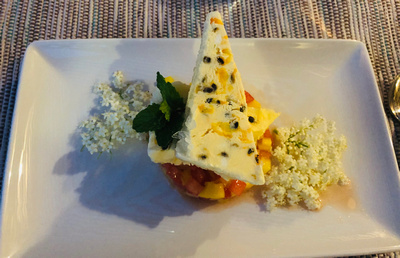 The last leg of the journey was a very long dirt road with tremendously large potholes. Our daughter, arriving later after dark, commented that if she didn’t have so much experience of travelling with Encompass Africa: www.encompassafrica.com.au, whose arrangements she trusts completely, she would have been terrified! Being driven alone along this rough back road in the dark, she would have wondered if she was being kidnapped if she did not have the utmost confidence in Encompass Africa's arrangements. 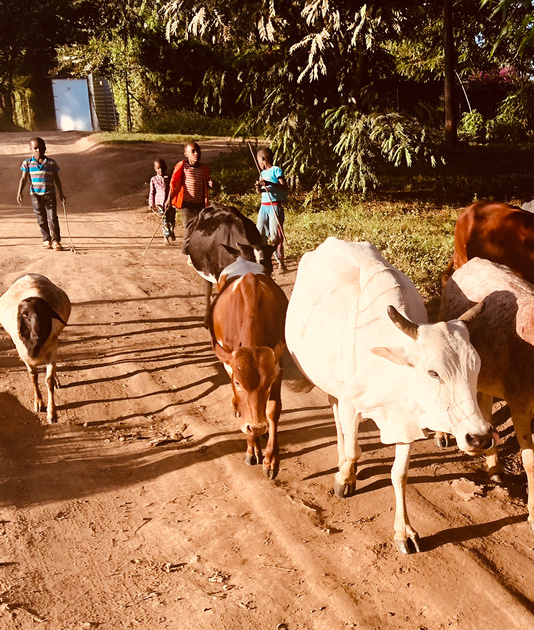 The guest house was very pleasant and welcoming, with a lush garden and pool. The rooms were very spacious and comfortable. It had beautiful views from the garden, not of Mount Kilimanjaro but another mountain in the area, Mount Meru.

Luckily when we saw Mount Meru in the evening we seized the day and took photos, because the next day it was shrouded in mist. I wanted to photograph Kilimanjaro that day, but it was also coyly hidden. We took photos in the garden, seeing some lovely birds. 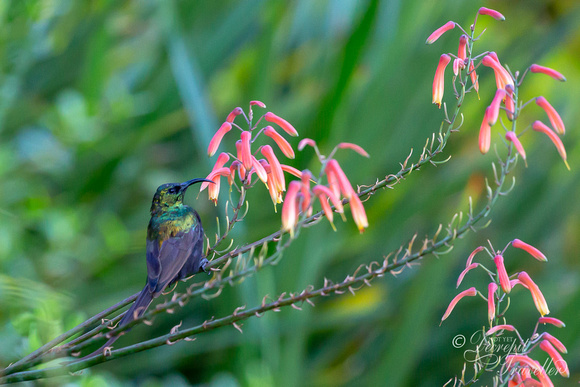 Instead of photographing Moumt Kilimanjaro, we spent the next day looking around Arusha. The Tanzanite Museum was interesting, and we were fascinated to learn the origin of the word carat. However, there was heavy pressure to buy and we are pretty sure our guide got a cut. 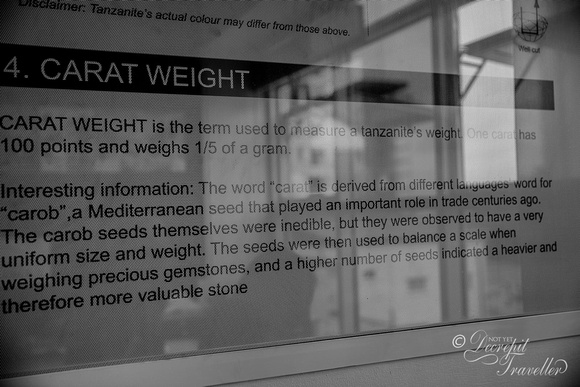 We walked around Arusha, our guide pointing out a highlight - a brick tower with a Coca Cola sign at the bottom. Coca Cola did not build the tower, but they pay for cutting the grass around it. The scene on the road leading out of town was very colourful. 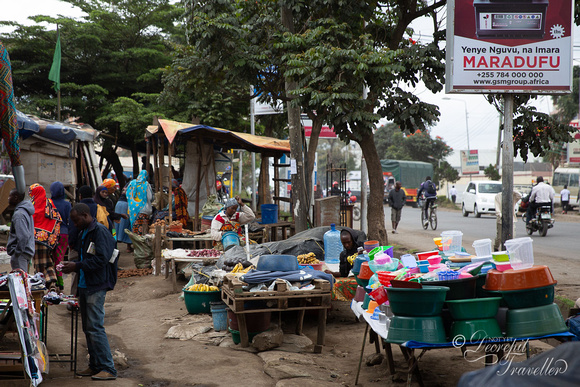 We drove along busy roads which reminded us so much of India and China, with their inventive use of what people had to hand, like this lady cooking her home-grown corn to sell. 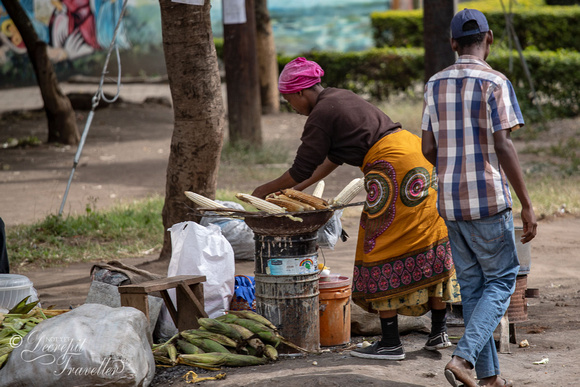 The people improvised cleverly with what they had to make a living, and got around with huge loads. 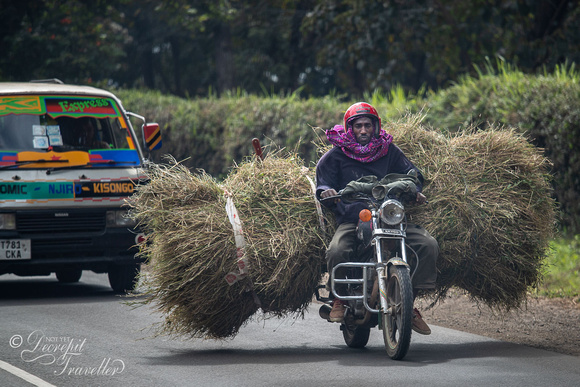 I took some photos of the passing scene but was warned to be very careful as my phone or camera might get snatched. This man already had one and was making happy use of it! 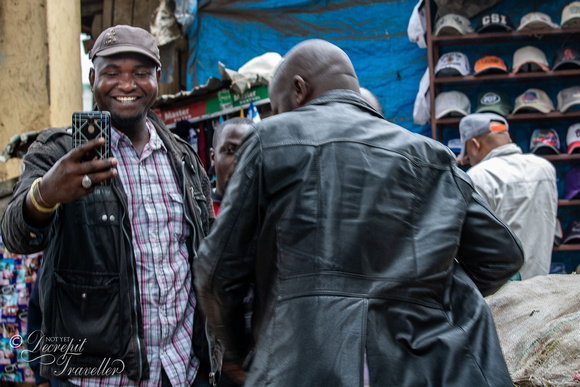 We then went to the market. I felt most uncomfortable. The people stared at us with what seemed like hatred, put up warning hands, averted their faces and in the universal gesture, rubbed their fingers together if we so much as looked at them. 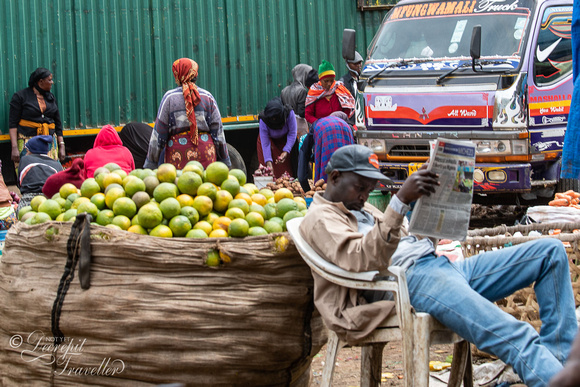 They wanted payment if we took a photo. I don’t mind paying if that helps them out, I have much and they have little. However, we had limited small change in American dollars. I paid this lady but even then she kept her face averted and was far from friendly. 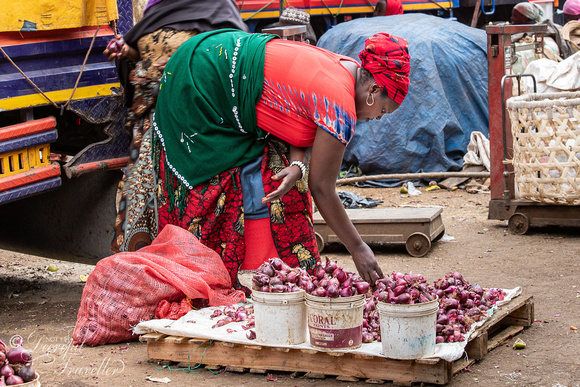 We ran out of American dollars. I started taking photos of produce for sale, like these irons designed to be filled with hot coals. 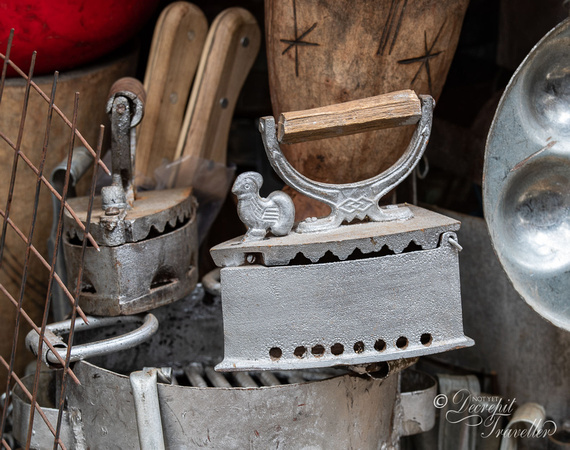 We asked our guide why they seemed to resent tourists so much. He said they thought everyone who took photos was going to sell them for lots of money – which is certainly not true of me! It’s all about the memories and sharing our experiences, not for profit. 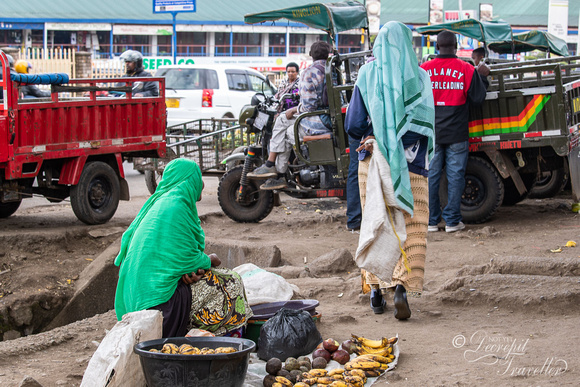 A young boy began following us around the market trying to sell us a limp bunch of coriander. By then we had run out of money. He looked so mournful that in the end I asked our guide could he pay in local currency for me to take a photo and buy the little lad’s coriander. I guessed that sad-eyed little boy had been told not to come home till he sold it, poor lamb! 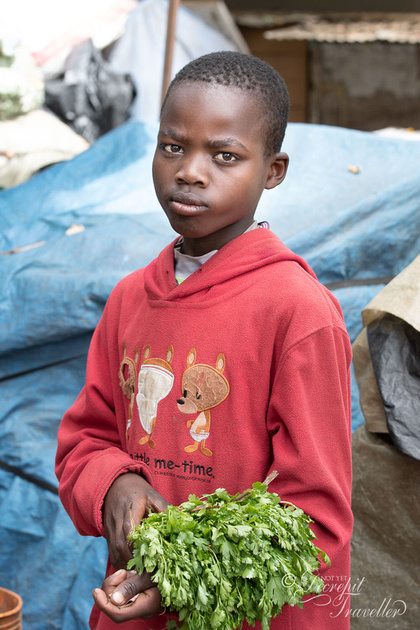 Not Yet Decrepit Traveller
I'm glad the photos took you back in time, Louise! We do love Africa and particularly the wildlife. We didn't travel so much in our youth and now we are hitting it with everything we've got while we still can - you only live once!
Not Yet Decrepit Traveller
Thank-you so much for your comment, Dhara, I'm very happy that you enjoyed it, the people just love vibrant colours! No, I'm afraid Mount Kilimanjaro coyly hid its head the whole time we were there, but that's a good reason to go back another time.
Louise Wilson(non-registered)
Your photos of Arusha took me back to my days in PNG many moons ago. But my photos of that time were never the calibre of yours! I'm amazed at your adventurous life these days. Africa seems to call to you and Pat.
Dhara(non-registered)
This is a lovely read, Roz! I love all the color in your gorgeous photos. I am hoping you got to take photos of Mt. Kilimanjaro before you left!
Not Yet Decrepit Traveller
Thank-you so much, Estelle, it's great to know that you felt you came along on the journey and experienced the pitfalls, highs and lows along with us!
No comments posted.
Loading...
Subscribe
RSS
Recent Posts
India - exploring Delhi Ranthambore Part 2 Tigers at the River Tigers of Ranthambore Tswalu, the Kalahari, Part 3 The Kalahari : Tswalu Part 2 Kalahari, Tswalu, Part 1 Mala Mala Sable Camp Part 1 Mala Mala Part 2; South Africa; Kruger National Park Tanzania - The Serengeti Part 2 Tanzania : The Serengeti
Keywords
photography Travel blog landscape travel arctic blog india walrus seal svalbard
Archive
January February March April May June July August September October November December
© Not Yet Decrepit Traveller
User Agreement
Cancel
Continue