Ranthambore Part 2 Tigers at the River

Continuing on from our wild ride to the river in Part One:

We were amongst the first at the narrow road alongside the river thanks to our excellent guide Nafees Mohammed and our skilful driver Meena – and our own tenacity, hanging on for dear life as our jeep careered wildly towards the river with three of us in the front seat, as described in Ranthambore Part 1! 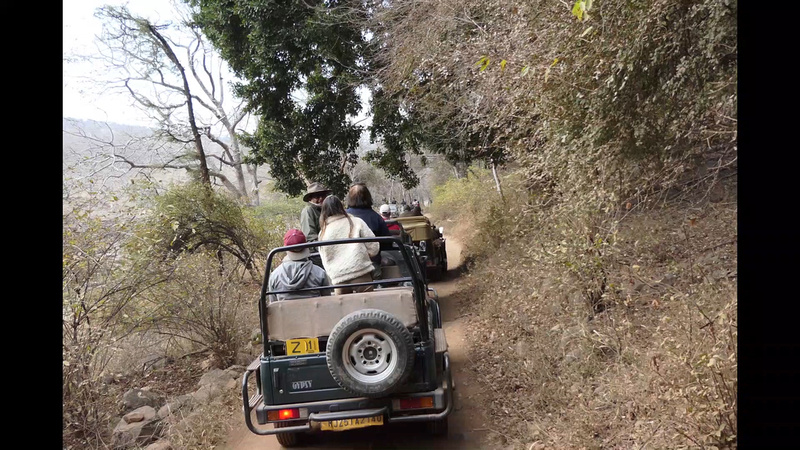 I could see the urgency to get there and secure a good spot was well-founded – we had the wooded slope on one side and the drop to the river on the other. It was single file with no possibilty of securing a better spot, unlike the scrum around the tigers at the meadow.

So now that we were here……were they going to come? We waited with bated breath………….and then.... these majestic animals – still only sub-adult cubs but already truly regal Bengal tigers – came stalking down the forested hillside towards us, headed for the river – Nafees was right! 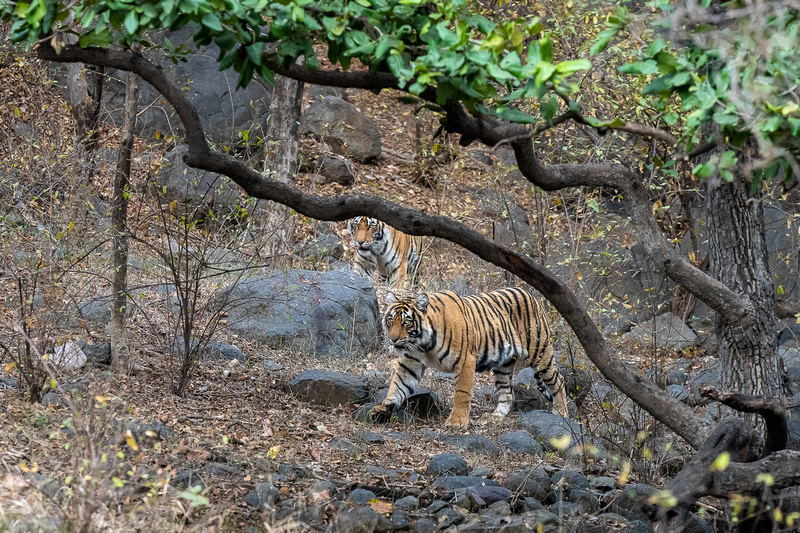 Arrowhead began inspecting the trees and marking them with her scent, sometimes right next to our vehicle. It was easier to get a clearer shot of this magnificent tigress without the grasses of the meadow in front. It was hard to get all of her between the tree trunks, so this is a portrait shot. 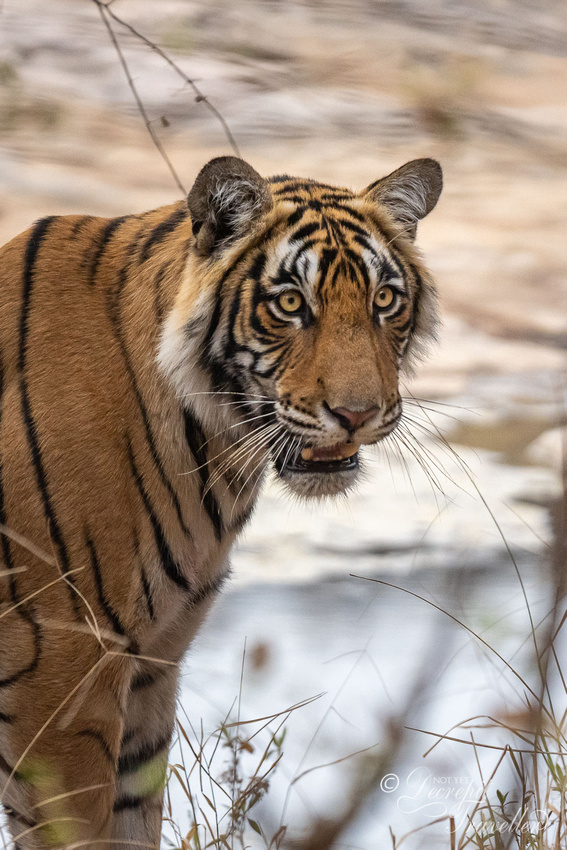 We were all parked up higgledy piggledy along the narrow road. Like animals in Africa, the tigers ignore people in the vehicles – it is as if we are in a mobile hide. However, unlike Africa, the people stand up and shout, gesticulate, negotiate for a better spot, and fool around with their cameras. 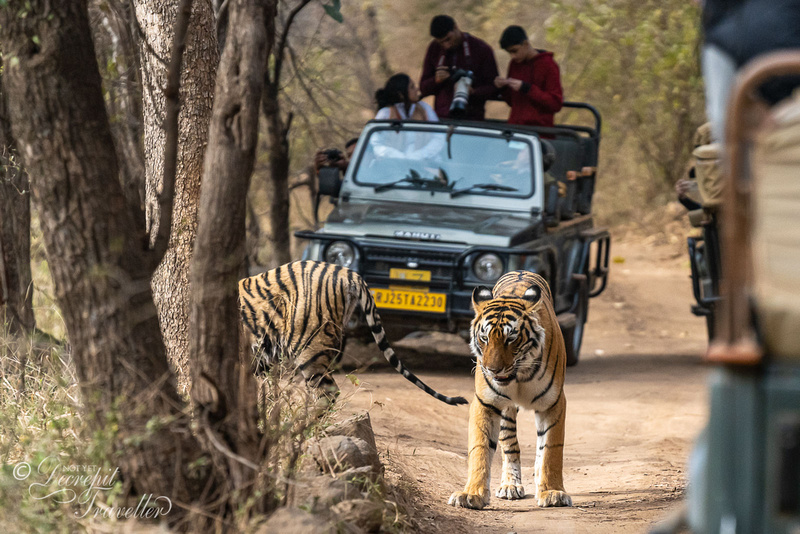 It’s mayhem, and the tigers mostly ignore that, too – but you can tell they aren’t comfortable. There is relief in sight, though, as they go to a place where the vehicles can’t follow – the river below! Arrowhead finished marking her territory and then led her cubs down to the water. 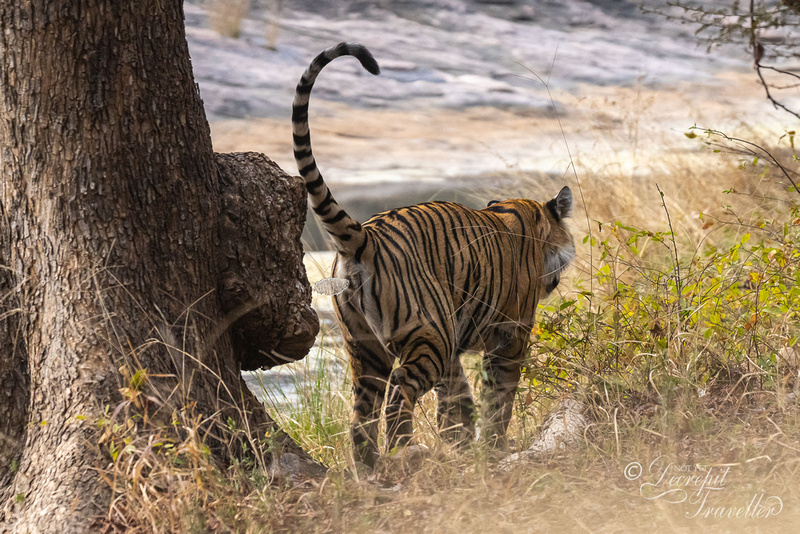 Other big cats except the jaguar don’t generally like the water. However, tigers are perfectly at home in it.

Arrowhead is testing the temperature, or so it seems. 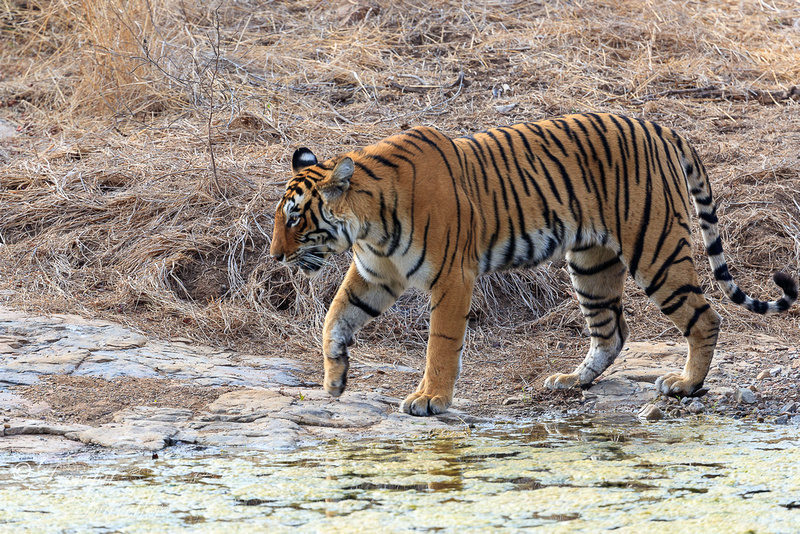 A tiger cools itself via its paws. They revel in the cool water, particularly in India’s brutal summers. We were there in early spring so it wasn’t all that hot, but the tigers gratefully refreshed themselves nevertheless. 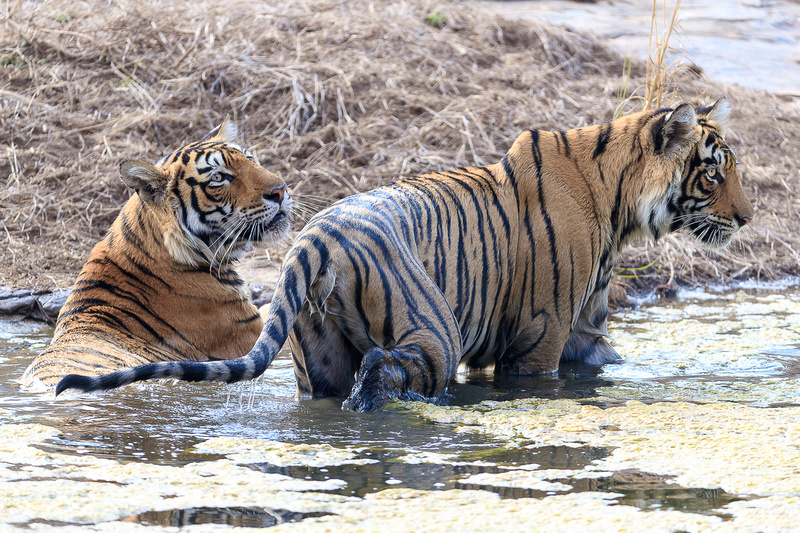 Arrowhead’s cubs were soon playing chasey games (well, that’s what we called it when I was a kid!) They raced through the water after each other and we struggled to keep up with their surging movement while taking photos.

It was such a pleasure to see them enjoying their freedom from mother's tight discipline in the meadow! 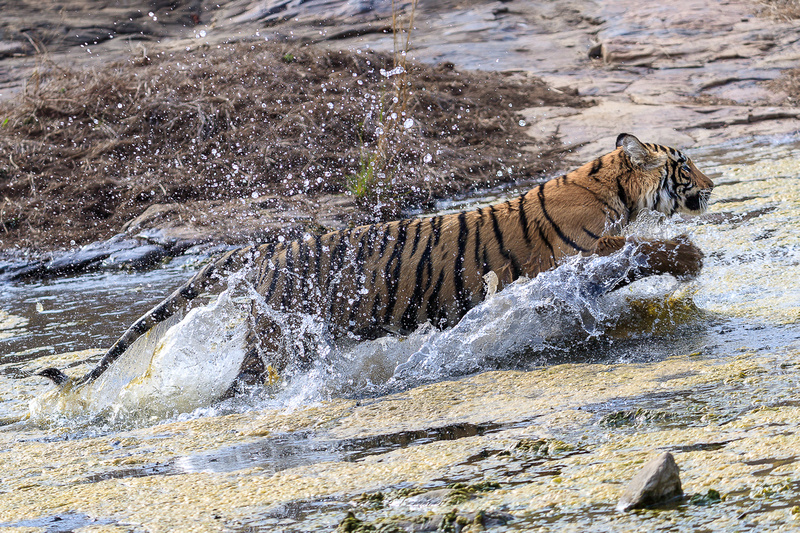 I nearly rejected the following photo. It was dark and the difficulty of tracking the fast movement shows in how the cub is nearly out of the frame. However, I liked the feeling of movement and the cub was in good focus.

I cropped it down, cloning to remove the paws of the cub on the rock above the head of the cub in the water, and using content aware to add a bit to the top of the frame. That gave more room to its ear. I was then able to lighten my subject, lift the shadows and draw attention to the cub. 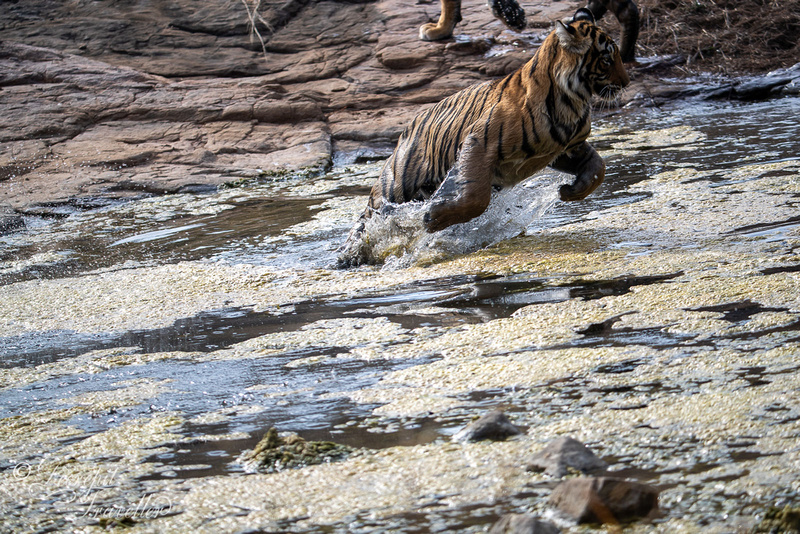 The next image is the result. I will not be able to use this photo in competitions because I have removed parts and added parts - even though I have not done that to the subject, only to the surroundings. However, I am really happy to have retrieved it from the bin and can edit the original RAW file in a different way for competitions. 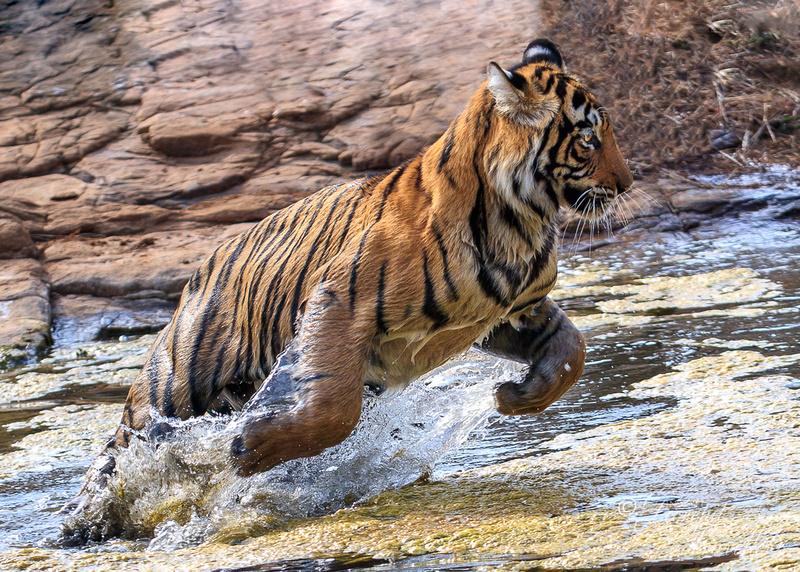 The cubs were loving the freedom after being bossed by their mother to stay still and leave her alone back in the meadow. They charged after one another enjoying a game of tag like all kids! I love the tail flicking up water as this girl chases her sister. 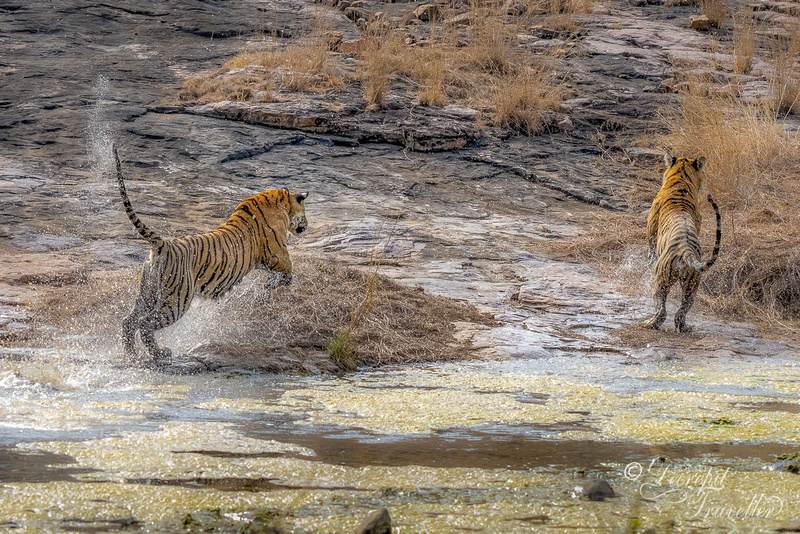 Meanwhile Arrowhead enjoyed some peace and quiet at last. One cub came over for a cuddle and was tolerated briefly. 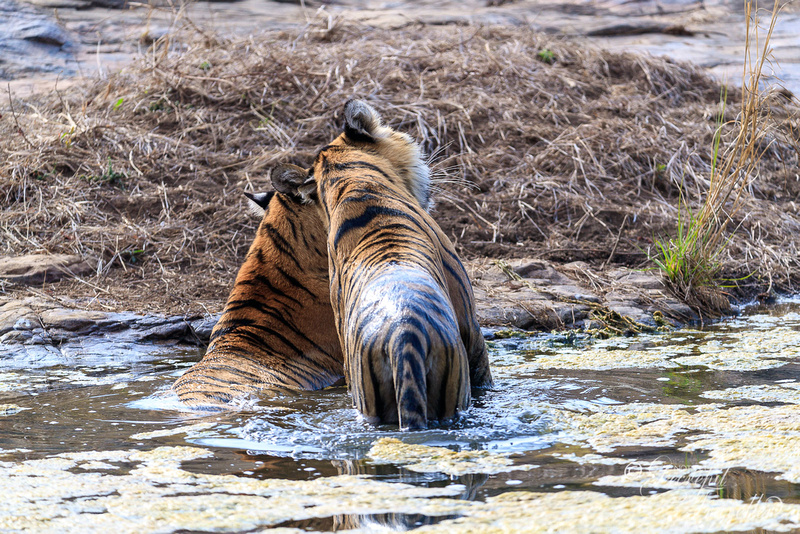 Arrowhead had not changed her stripes, however. After a bit of smooching the cub was well told off!

Mother just wants the children to go play and give her a break. 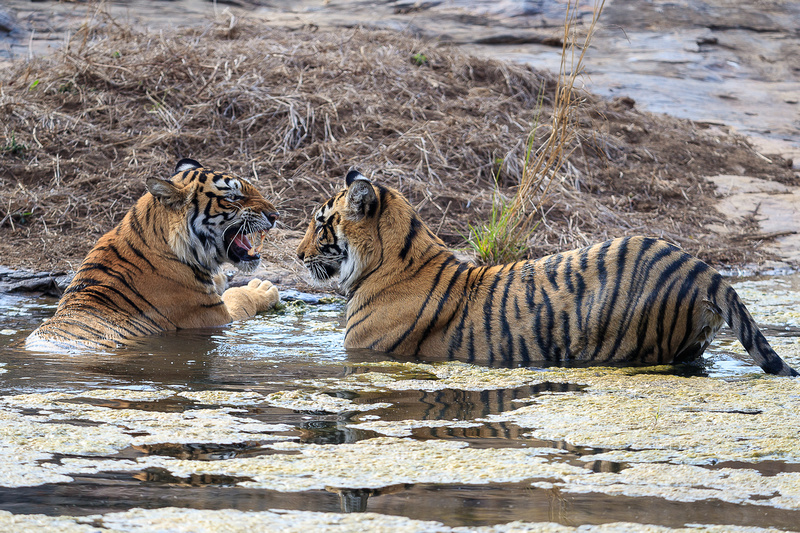 Giving her sister the stink-eye! Having been rebuffed by her mother, this sub-adult tiger cub is warning her sibling to stay away! The interaction between this family was priceless – I learned so much about them in a few short hours! 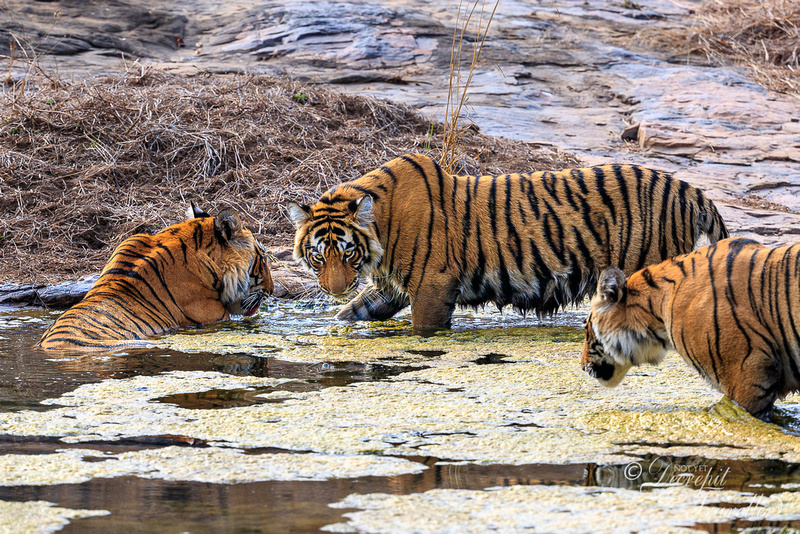 The jealous sister remains on guard, not letting her sibling come near their mother. Like all the domestic cats we have ever had, they put on a nonchalant air – the one, innocently pretending she never gave her sister the stink-eye, the other, pretending that she hasn’t been driven off but is actually just sampling the water weed. 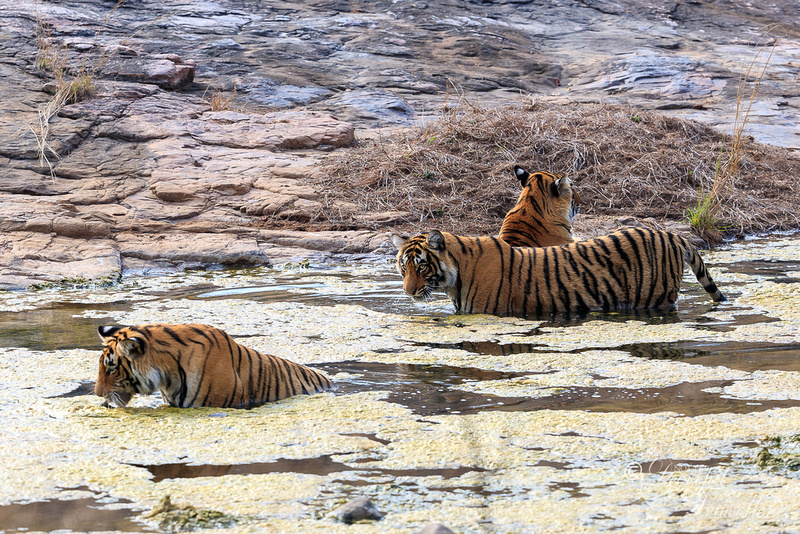 It wasn’t long before the cubs were playing again. Cubs are not given names until they become adults. This young tigress is powering through the water with her muscular shoulders showing that even though she is still a ‘teenager’, she is already a force to be reckoned with. It was such a privilege to spend time with these magnificent animals, biggest of the cat family. 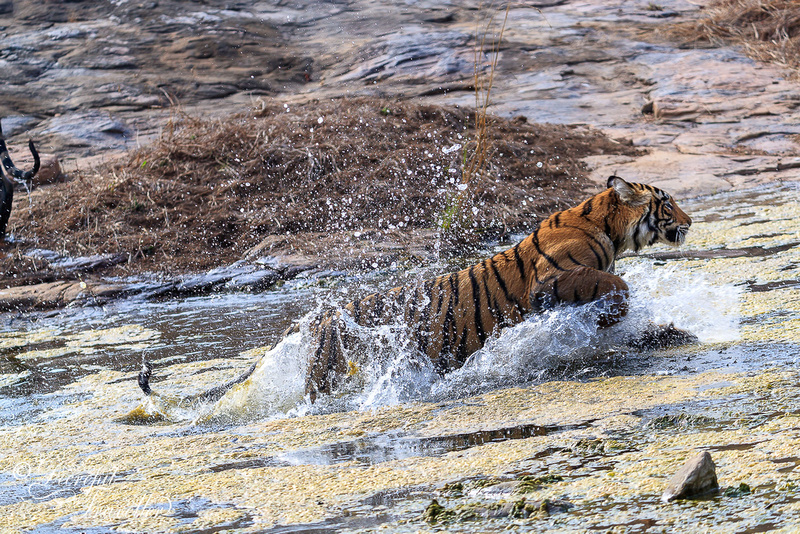 Tiger Playing in the RiverRanthambore, India

Having a lighter Sony A7R Mk IV with a 70-200 lens meant that I could zoom out and get the two cubs in the frame. They were letting off their pent-up energy in the water, then leaping up onto the rocks to chase each other. They were having so much fun – the only cats apart from Jaguars who are at their ease in water. It brought a smile to all our faces to see them enjoying their natural habitat! 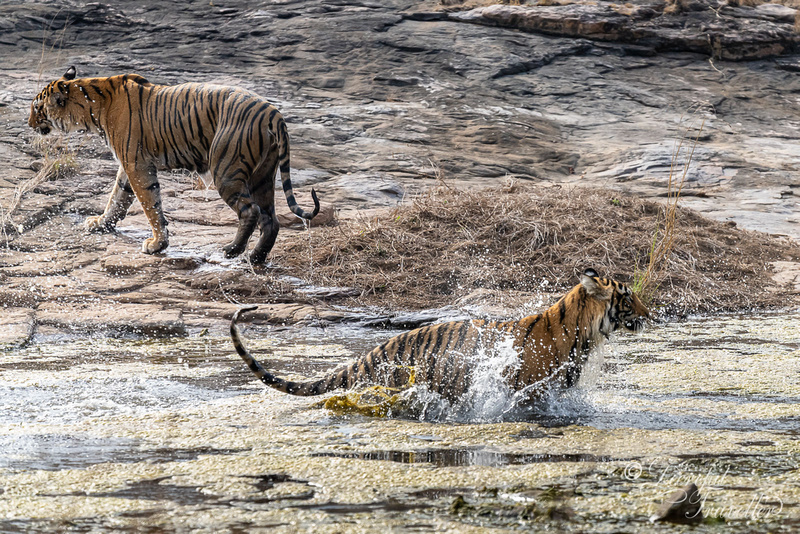 Arrowhead led her cubs away from the river on the other side where we could not follow. 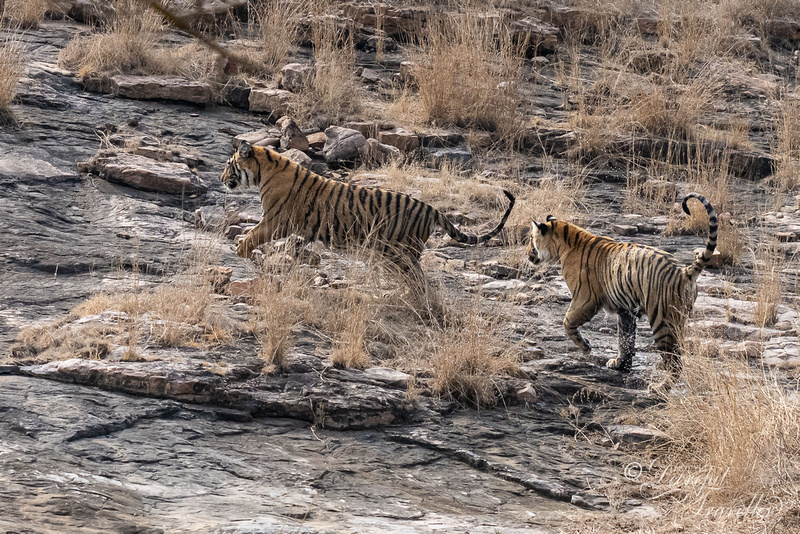 Regretfully we realised that our magical morning with this tiger family was coming to an end.

As Arrowhead marked her territory the cubs curiously clustered around the tree smelling her scent. 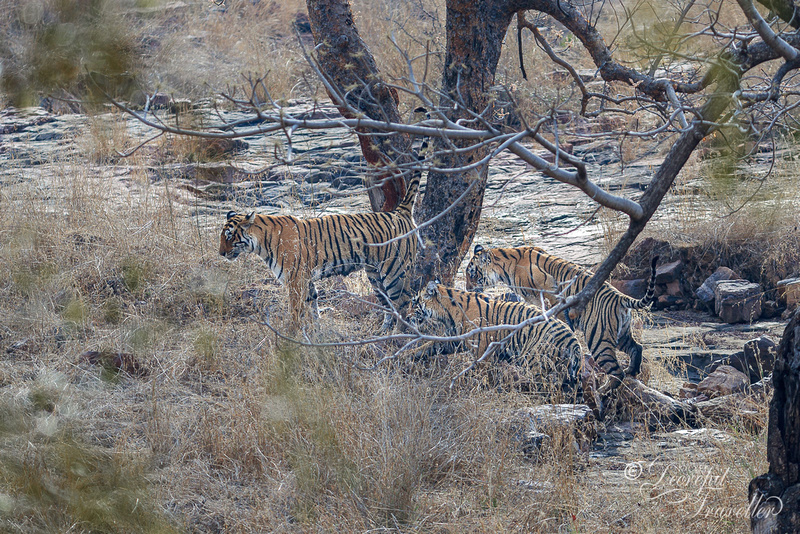 My last sighting of Arrowhead’s family was the more cautious of the two cubs, tentatively advancing a paw to test the water as she follows Arrowhead and her bolder sister across the stream and out of sight. I love the expressiveness of that delicately poised paw! 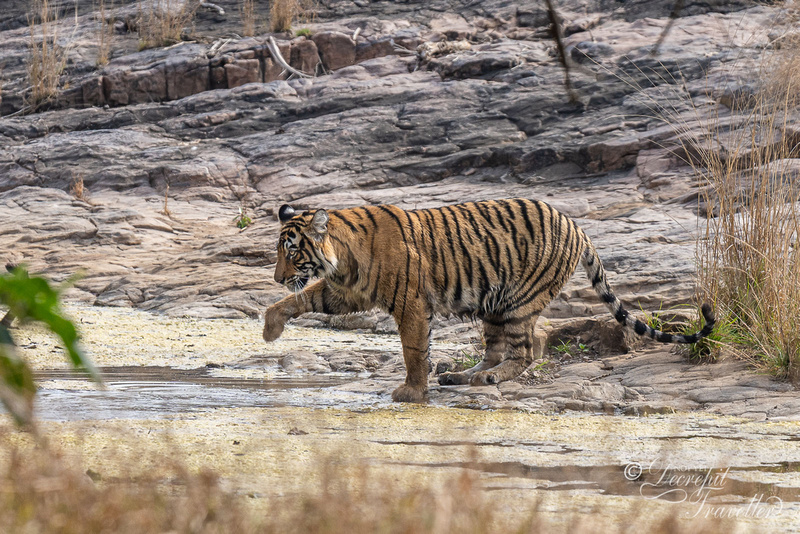 We then had to hurry up and get out of this zone, before the National Parks' 'curfew' kicked in. There are new, very sensible rules to give the tigers a break from humans. Everyone must leave the tigers' preferred zones of 1-5 at lunch-time, but can stay in Zones 6-10 until 3.00 p.m. If guests have an all-day pass, they are allowed back into Zones 1-5 after 3.00 p.m. 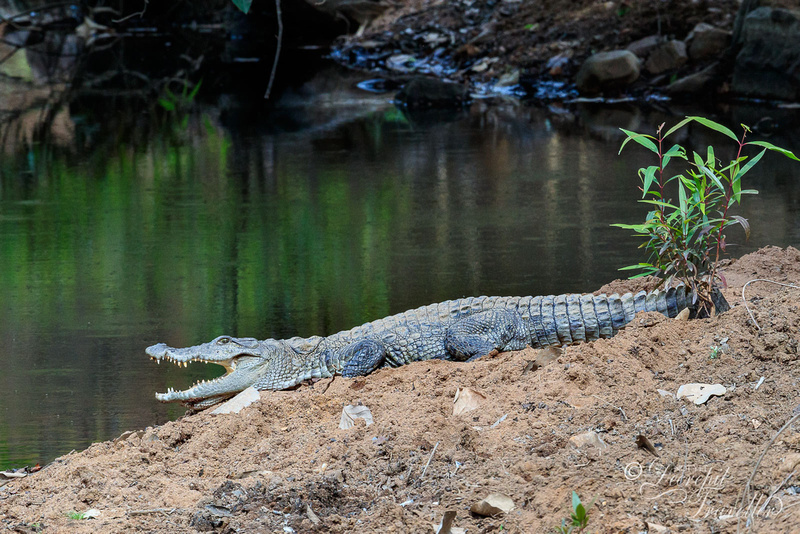 It was another crazy bumpy ride, as we tried to reach the boundary in time. I daresay tigers are not too bothered by mugger crocodiles which we saw by the river but other wildlife needs to watch out! 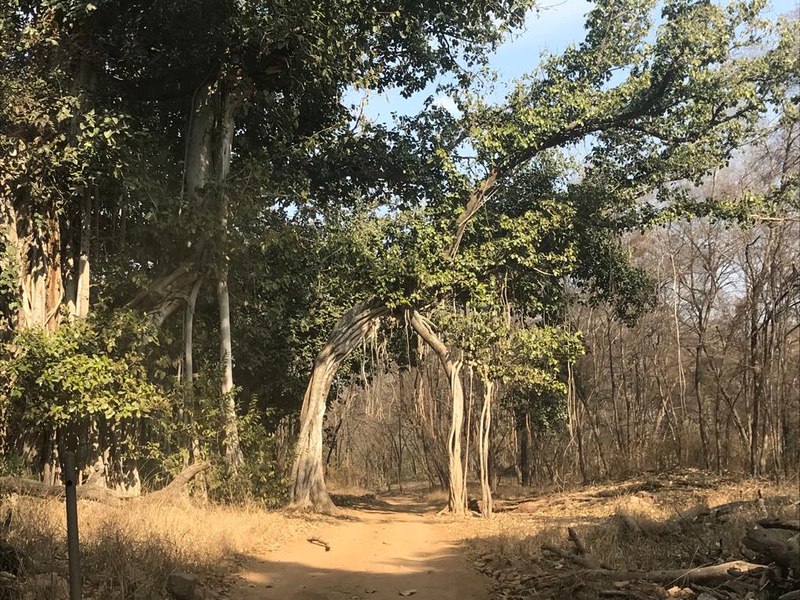 We passed through the beautiful park, seeing some of the other animals which are the prey of tigers - like this hog deer in the next image. 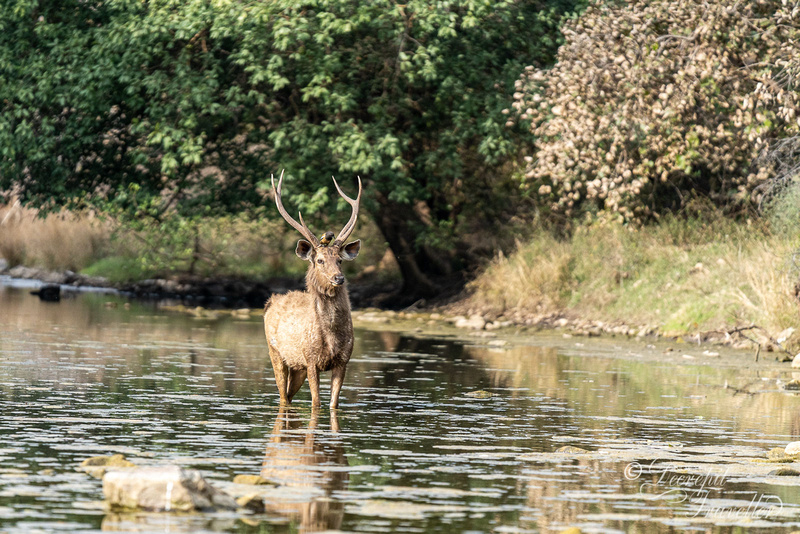 Birds were constant companions as we made for the boundary. 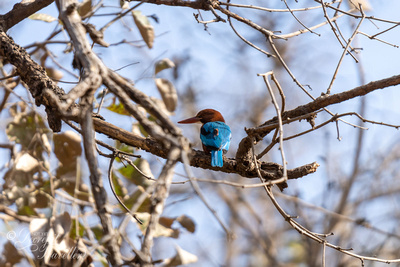 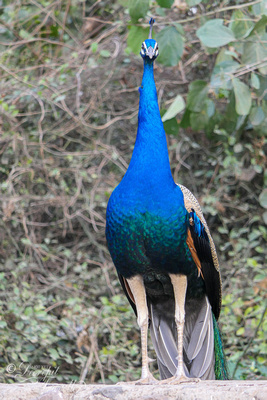 My neck with three compressed discs was very painful after all the jouncing in the morning. I decided to return to our hotel for the afternoon. I felt no need to be greedy - we were blessed to see so much and learn an enormous amount about this little tiger family while enjoying their interaction. My husband isn't that committed to photography so he was very happy to go back for an afternoon nap after our 4 a.m. start! 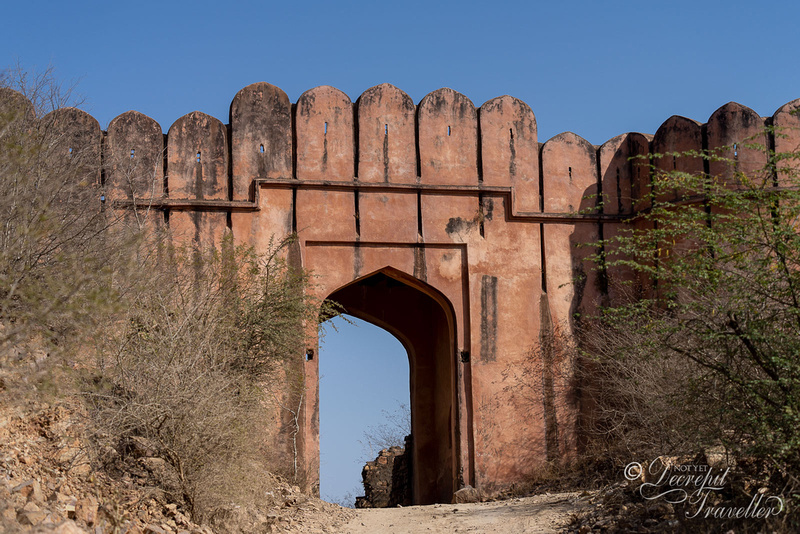 Our daughter and her husband remained. Since it would take a good hour to drive to the hotel and another to drive back, Nafees arranged for a taxi to pick us up at a park gate and take us back to our hotel, so that they would have a full afternoon looking for more tigers.

Off we went through the village with its vibrant market. 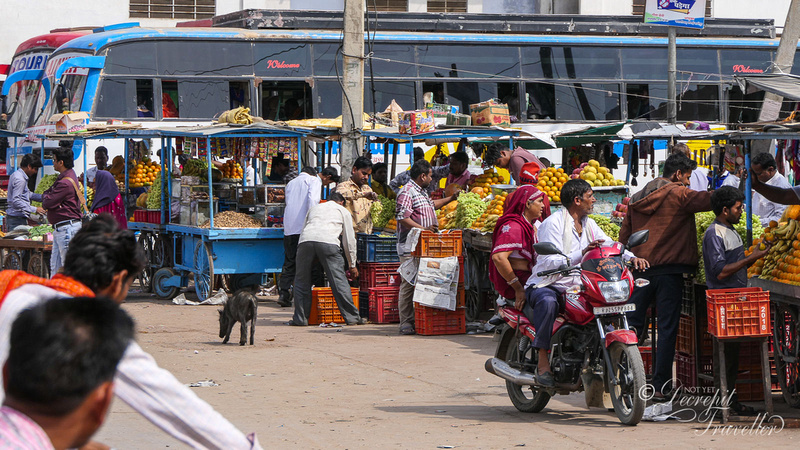 We enjoyed a peaceful afternoon recuperating - and when they arrived back I was sorry to hear they had not seen any tigers but also selfishly relieved that I had no need to beat myself up about missing anything because I had wimped out of the afternoon like the old lady that I am!