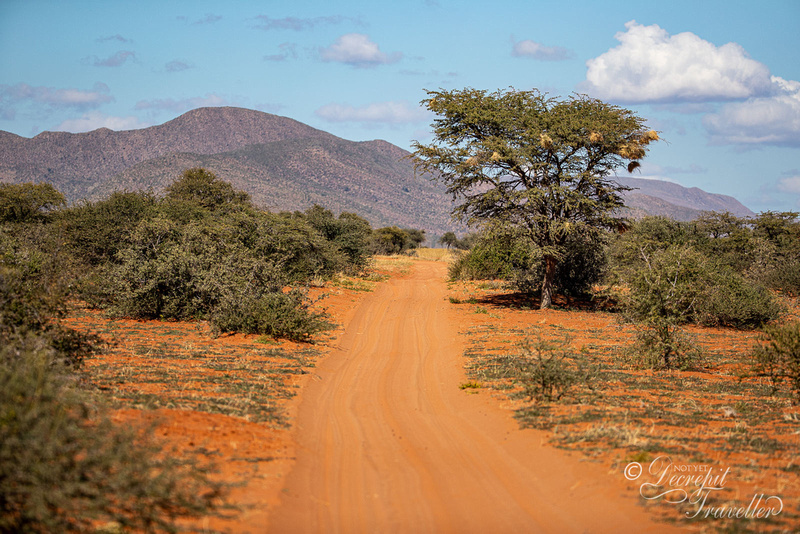 The red, red road was leading us to the pack of painted wolves. This is the new name for wild dogs. I hate the way names of animals and birds keep changing, but in this case the new name is more appropriate because they are most closely related to wolves, with a beautiful mottled coat of caramel, dark brown, and white. This adult painted wolf shows their big ears, long legs, and flag of a tail.

Tswalu’s painted wolves had a litter of 13 puppies! The first thing we saw was the puppy pile. All the little ones had fallen asleep in a heap. It was remarkable how well their colouring blended in with the colours of their environment in the dappled shade. 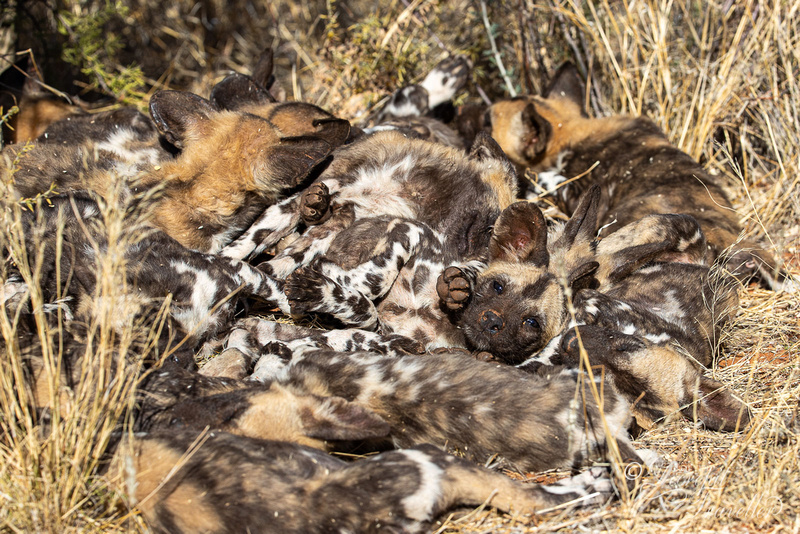 I managed to capture this little fellow off on adventure all by himself. They were just beginning to totter about like toddlers, insecure and falling over one another. So cute! It was a bit of a nightmare for photography though, a confusion of puppies! I have heard now that 13 has become 11 – it’s a tough life being a highly endangered painted wolf or wild dog.

One of the most interesting things about painted wolves is their highly developed social structure. These 13 puppies were being cared for by the ‘teenagers’ (sub-adults) from a previous litter of 5. This one seems to be giving a naughty puppy a disciplinary stare. 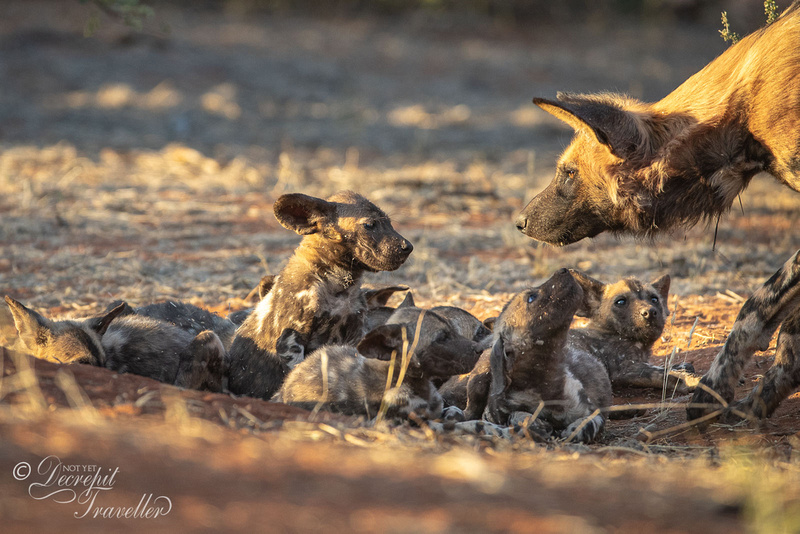 Feeding time for the puppy pile! In the following photo, the sub-adults are regurgitating semi-digested meat for the puppies, which cluster around them eagerly, making wittering noises to stimulate the regurgitation reflex. 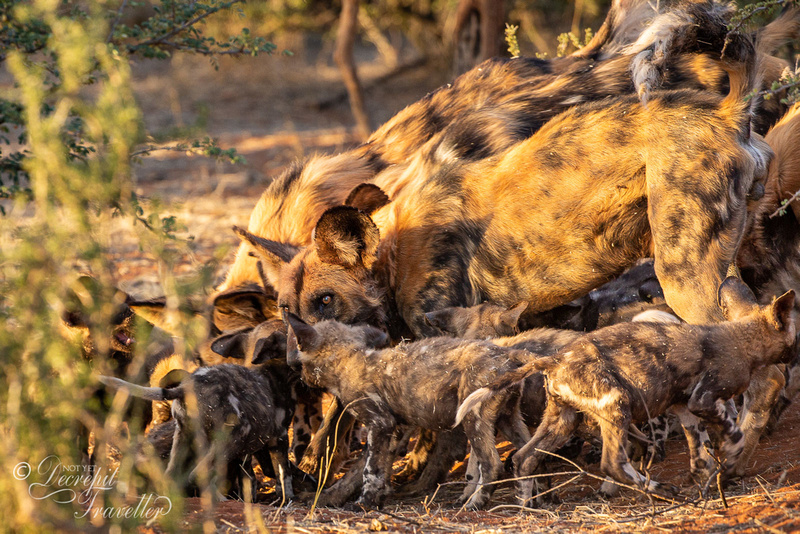 Painted wolf on the lookout! There is plenty to guard against for this highly endangered species. Habitat loss due to the constant expansion of humans drives painted wolves into smaller and smaller areas. This makes them very vulnerable to apex predators like lions and leopards, which see them as rivals for food, and will kill them if they can. 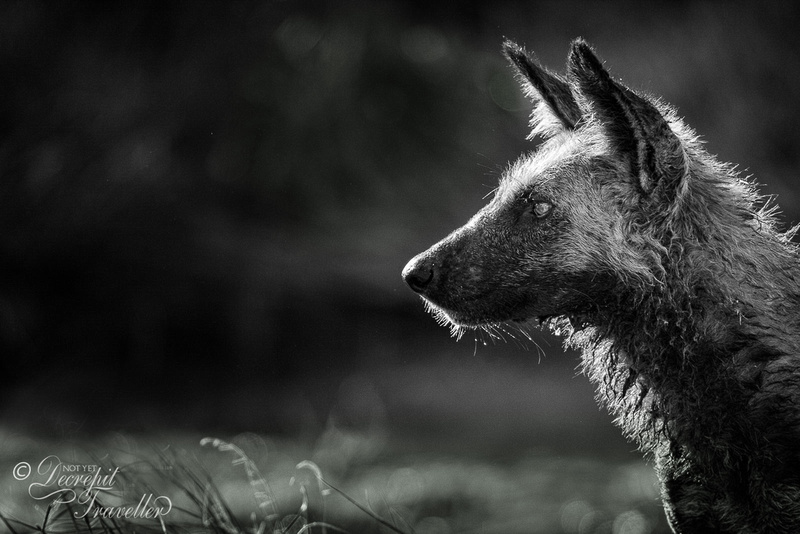 Tswalu have protected painted wolves and cheetahs by keeping them on one side of the fence bordering the road through the middle of the reserve, while lions are on the other side. This cheetah is much safer on this side of the wire fence alongside him. 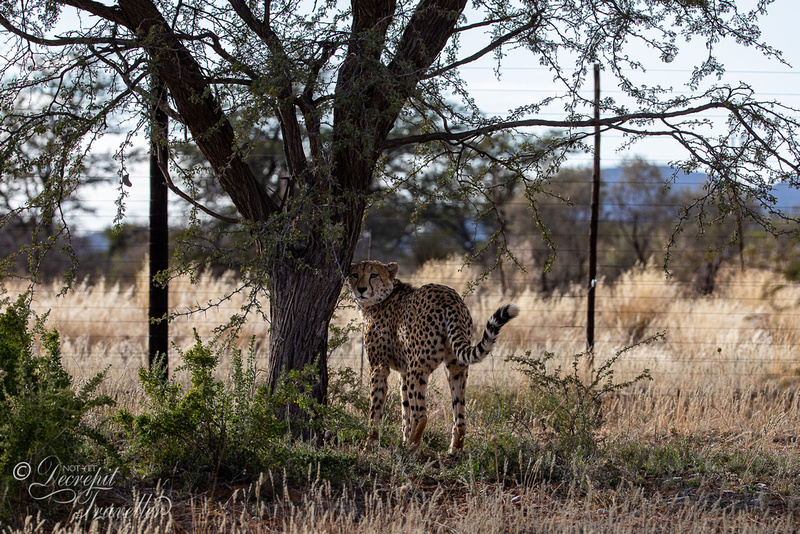 Painted wolves are particularly susceptible to the hidden killer, distemper. At Tswalu the entire pack was wiped out by distemper. Fortunately the pack had become quite numerous so some of their number had been sent to another sanctuary before this happened. 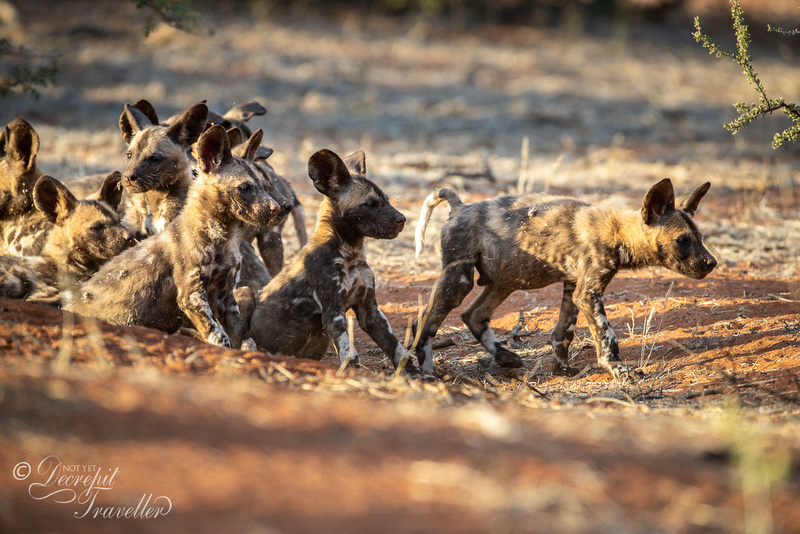 Those painted wolves were brought back and founded this new pack – the first litter being of five pups, the second the big litter of thirteen that we saw. It was decided to inoculate this pack – human intervention to be sure, but considering the harm humans do in reducing their habitat, to my mind it is right to help this highly endangered species. 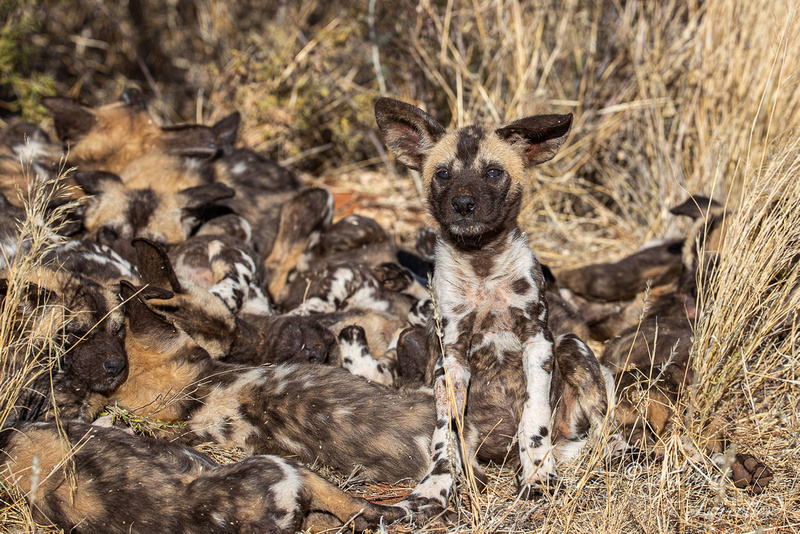 We returned to the camp and enjoyed a dinner in the boma, an enclosure in the open air designed to keep predators out. The cold air re-activated my cough, unfortunately. 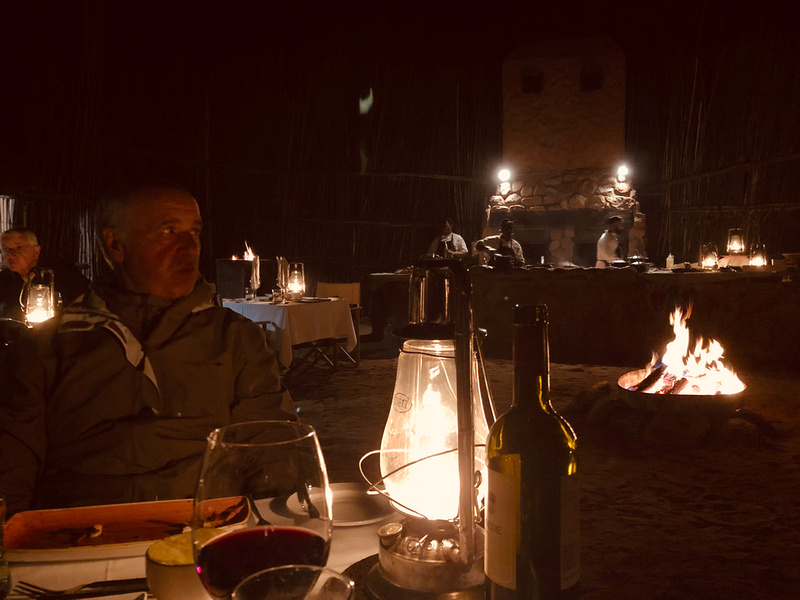 We retired early knowing it would be a pre-dawn start in the morning.

The next day was the anniversary of the day that our son was killed in a car accident when he was still a teenager. It is still hard for us decades later. Despite feeling emotionally low, we headed off in the early morning as usual. How healing nature is to the soul - as golden light gilded the grasses, we felt comforted. 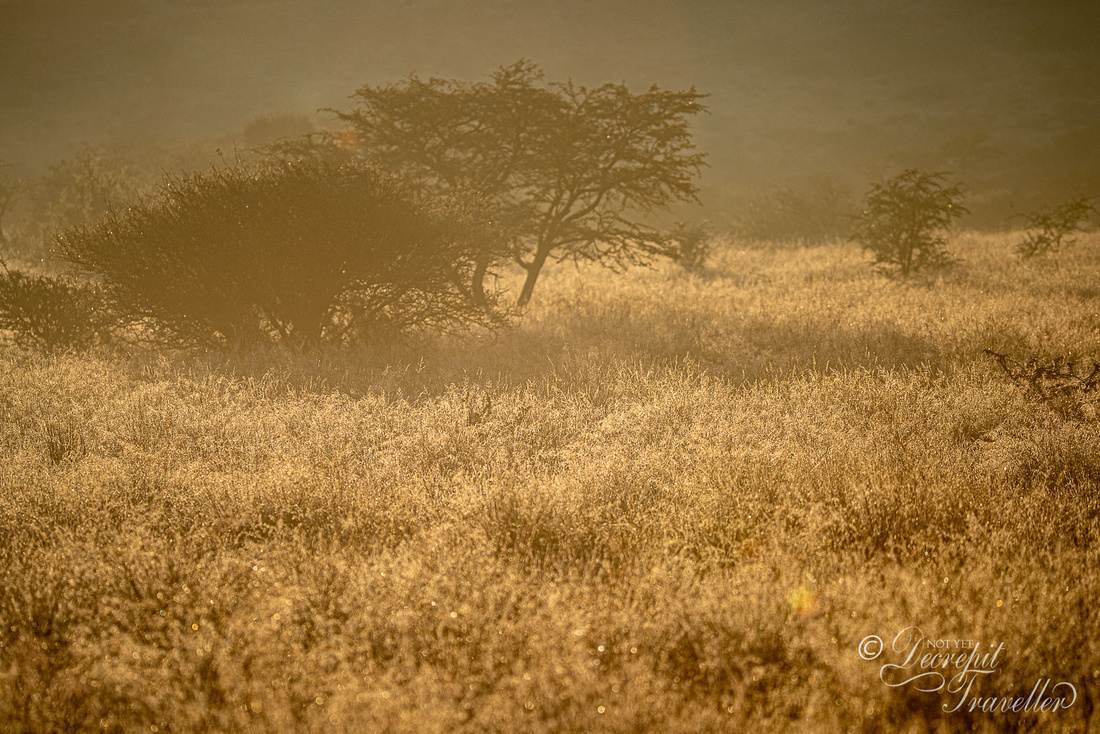 Somewhere in Africa, on this trip or an earlier one, we saw a rhino mother and baby. The mother was pregnant, and wanted to rest. The baby kept giving little huffing noises, trying to encourage her to rise and go explore. 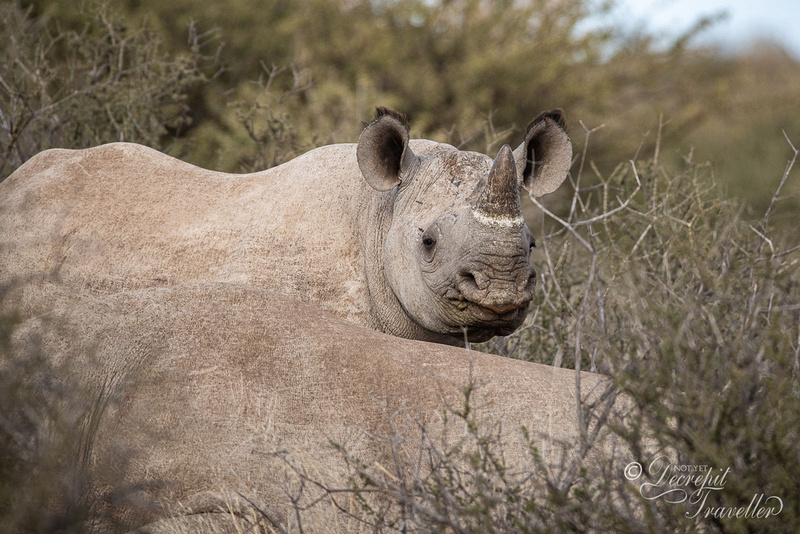 It was so like little ones the world over which are bundles of energy and want their parents to be in perpetual motion! This mother is clearly saying, 'Alright then! I'll get up! Just stop bothering me!' I can’t help wondering how come those people from Asian countries who drive the trade in rhino horn seem incapable of empathising with creatures which have babies, love them, and are pestered by them - just like we humans.

We headed out a long way towards the blue hills surrounding the plain, the clouds turning pink with sunrise. 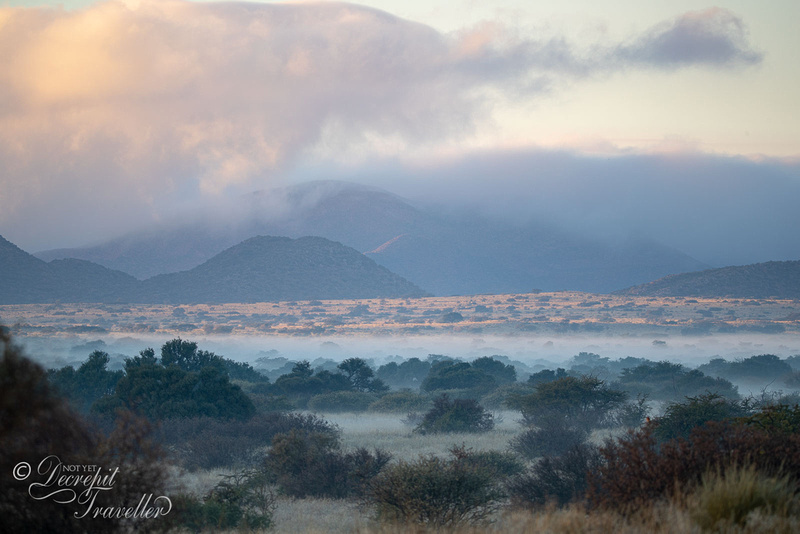 An ostrich regarded us with some alarm, powerful legs ready to run. 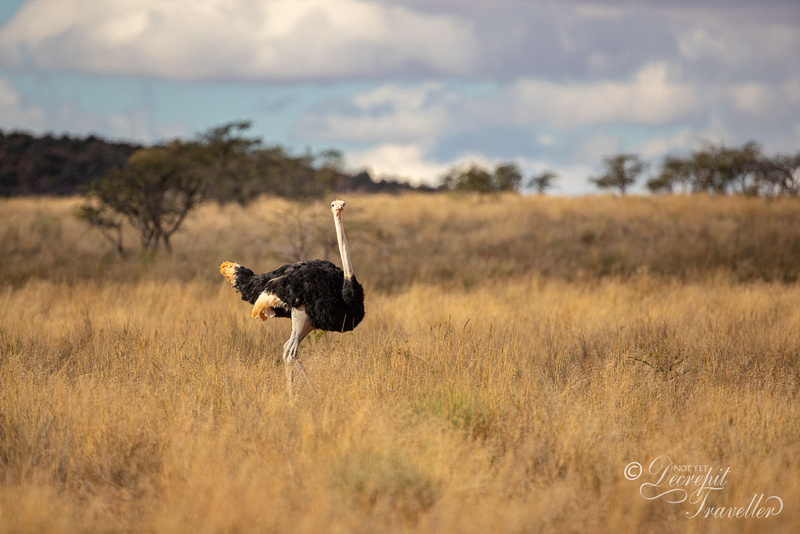 We ventured further afield searching for game, and came upon a pair of cheetahs. These were brothers, which usually stay together and help each other hunt all their lives. 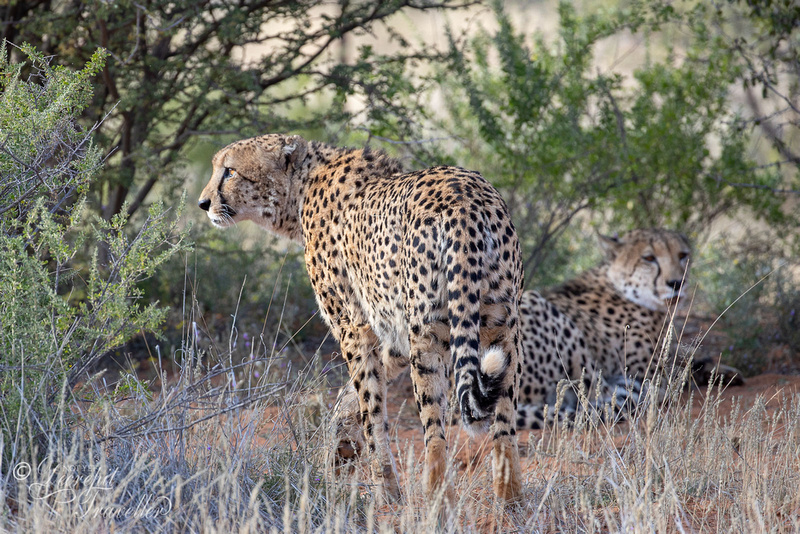 Although cheetahs could never take down a giraffe, these two had a very attentive audience keeping a close eye on them. 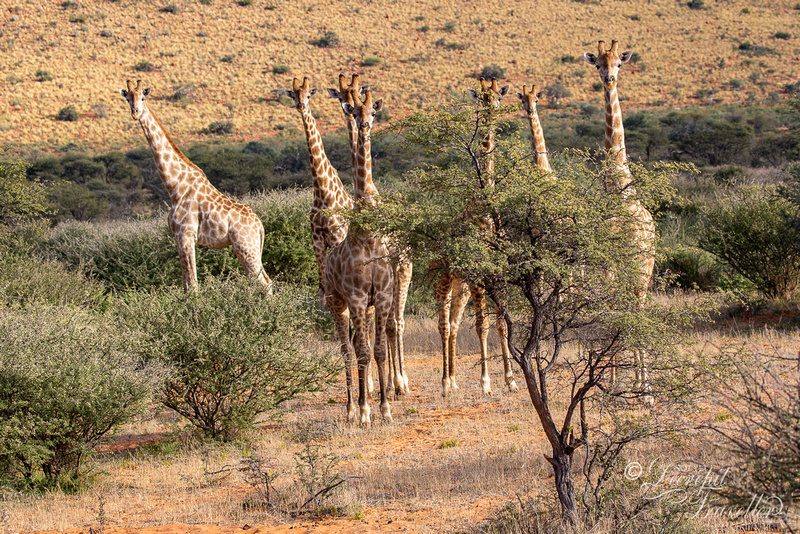 The giraffes followed closely as the cheetahs paced elegantly through the bush.

They stopped to check out smells and mark their territory every so often. 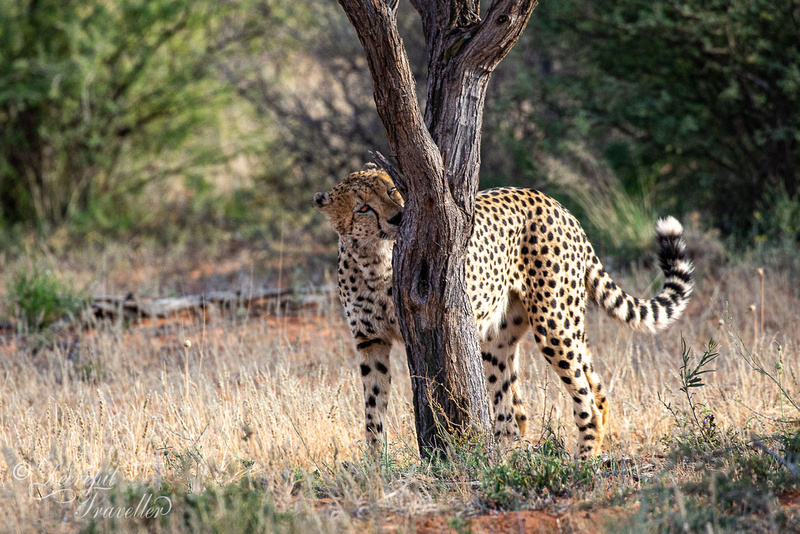 As we neared the hills this herd of oryx (also known as gemsbok) looked so atmospheric against the red hillside! It was a delight to see and photograph the scene. 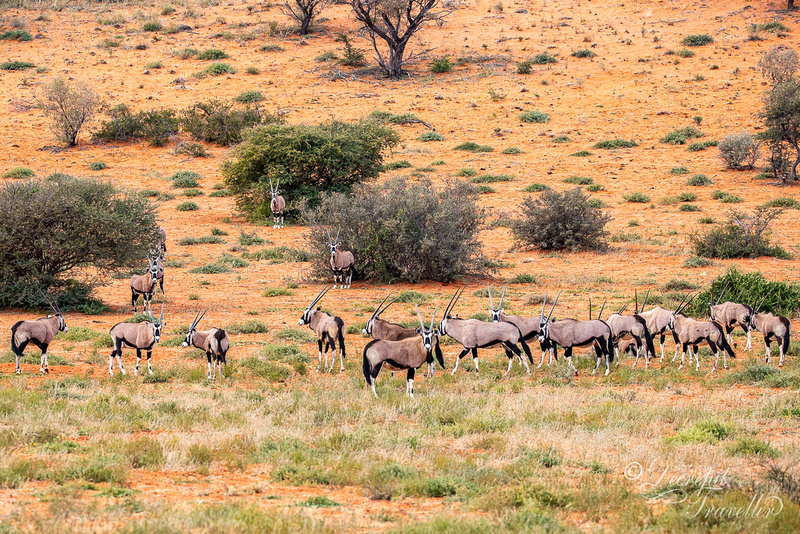 A red hartebeest checked us out from the rocky hillside, outlined against the sky as we headed back to the lodge for lunch and a midday rest. 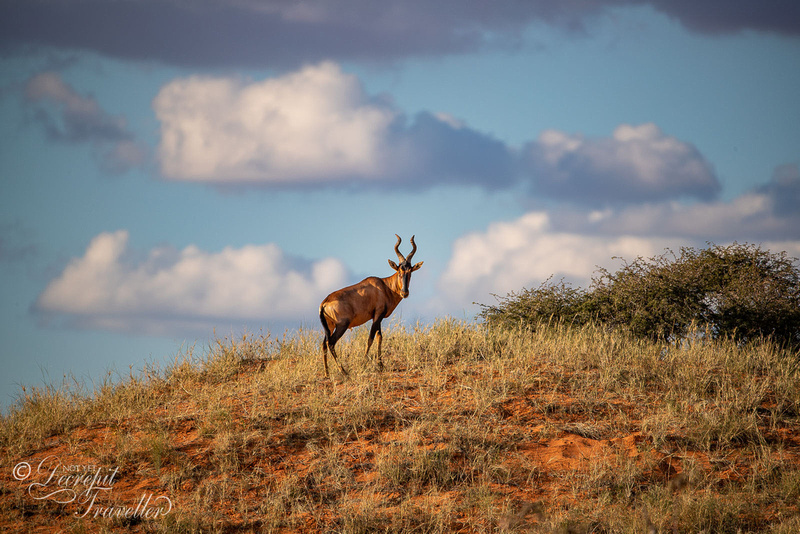 When we headed out in the afternoon, we were looking for aardvark – one of the three animals we came to see at Tswalu – the pangolin, tick, the meerkat, tick, and the aardvark – but this one was proving elusive and we searched for hours.

An aardwolf? I’ve never heard of one – didn’t even know they existed. ‘What? Where?’

Then we spotted this strange creature  a fair way off amongst the tussocky grass. 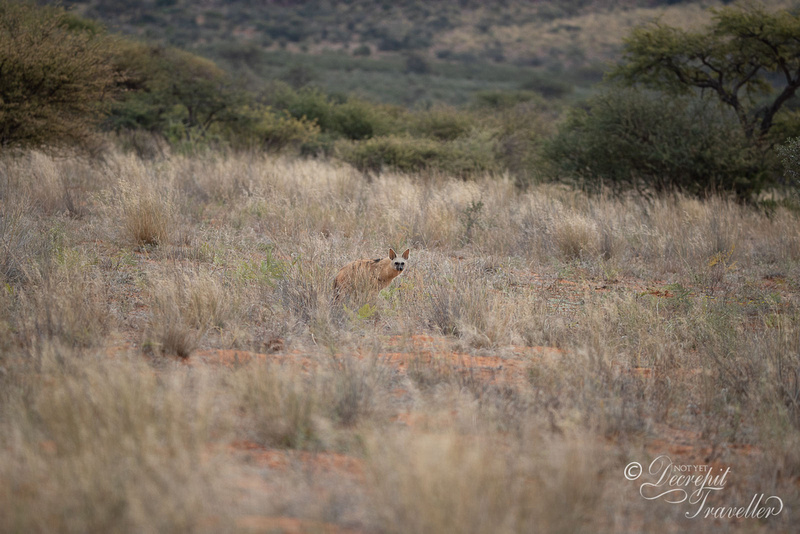 It is a member of the hyena family, living on a diet of ants, termites and their larvae. They eat up to 250,000 termites each night! It was a pretty creature as hyenas go, with its caramel coloured coat and big ears for hearing termites or ants scurrying underground. 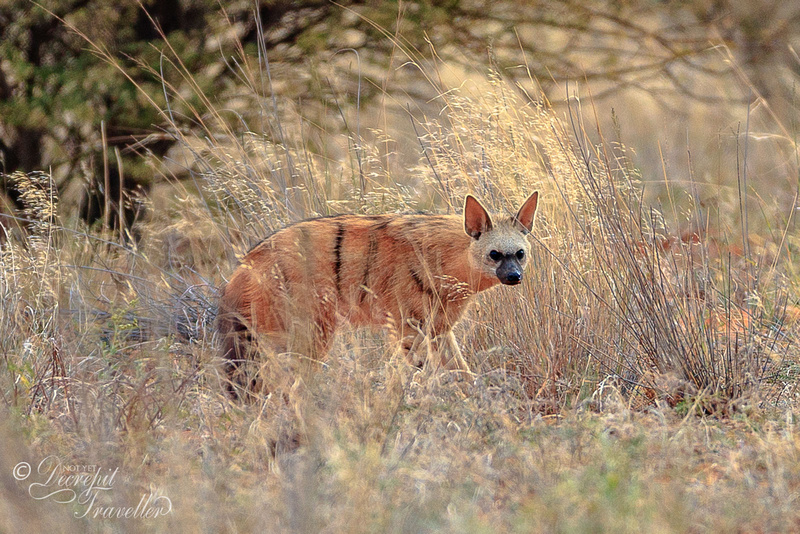 It had stripes and a luxuriant thick fur coat, this being winter, The amazingly bushy tail was nearly as big as its body. I must say it was fat and healthy on its diet of termites. 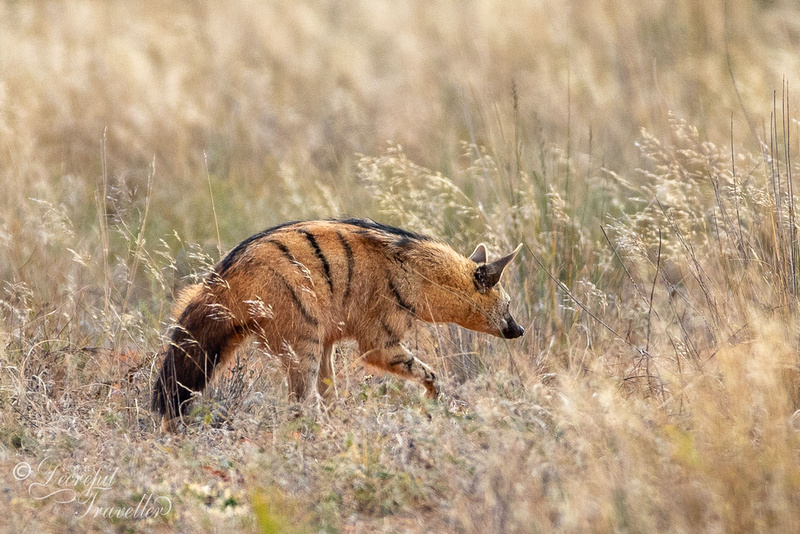 We were extremely lucky. They normally only come out at night, but sometimes in winter they venture out by day to avoid the extreme cold. This was a very rare sighting. 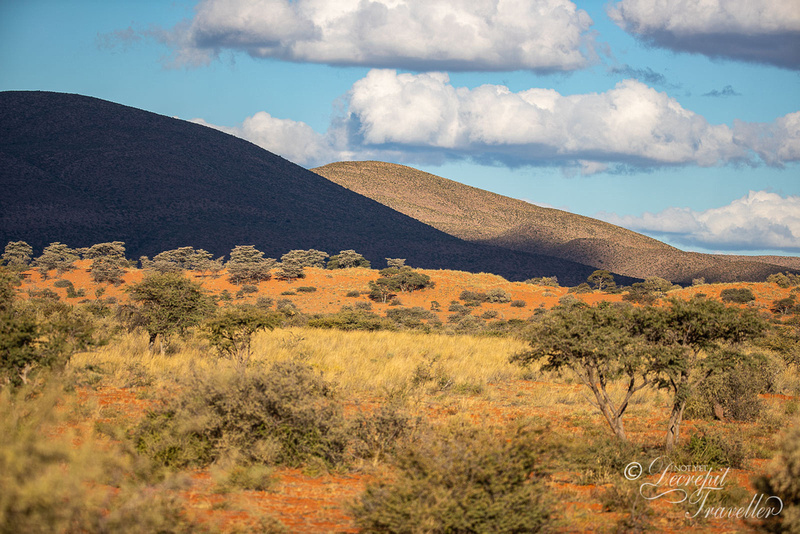 Heading home, we enjoyed the sight of the blue hills across the plain. In Australia the hills are blue looking due to the trees emitting eucalyptus oil into the air from their leaves – I wonder if that is why these hills looked so blue, too?

Agile Kudu bounded up the rocky hillside, then watched us with wary attention. 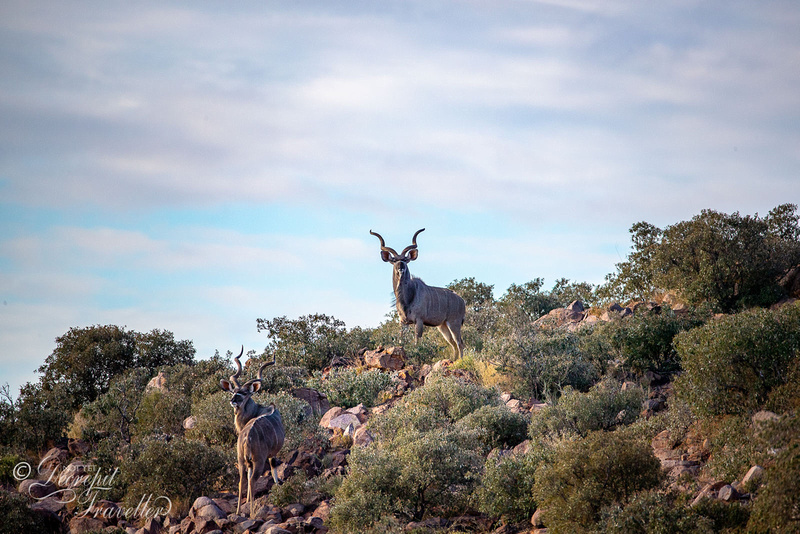 Then in the dying rays of the sun as we headed home to the lodge, I spotted a clan of really wild meerkats! These ones were not habituated like the ones we walked to photograph at their burrows. They all went on the alert, regarding us with many pairs of wary eyes which caught the low light. 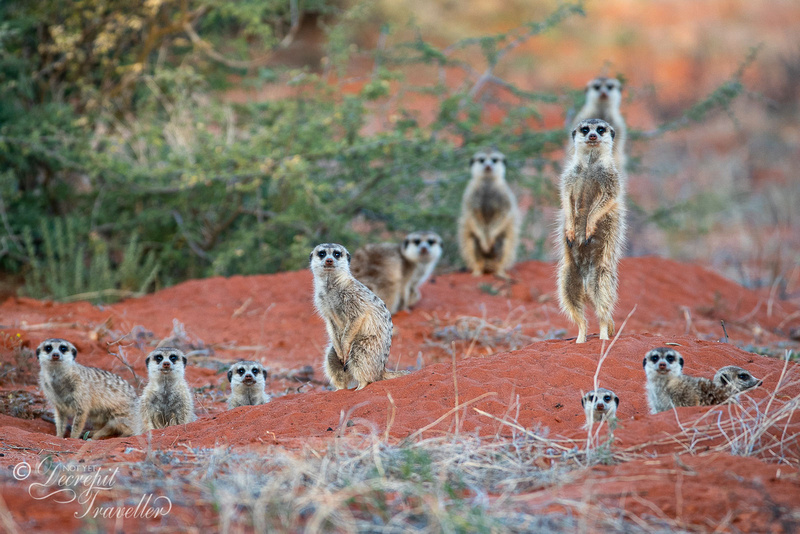 I called out to Kyle to stop, and was rewarded by just a couple of photos before it became dark. I loved this sighting more than that of the habituated meerkats - to see all those eyes watching us and the meerkats contrasting with that deep rich red sand was magical! 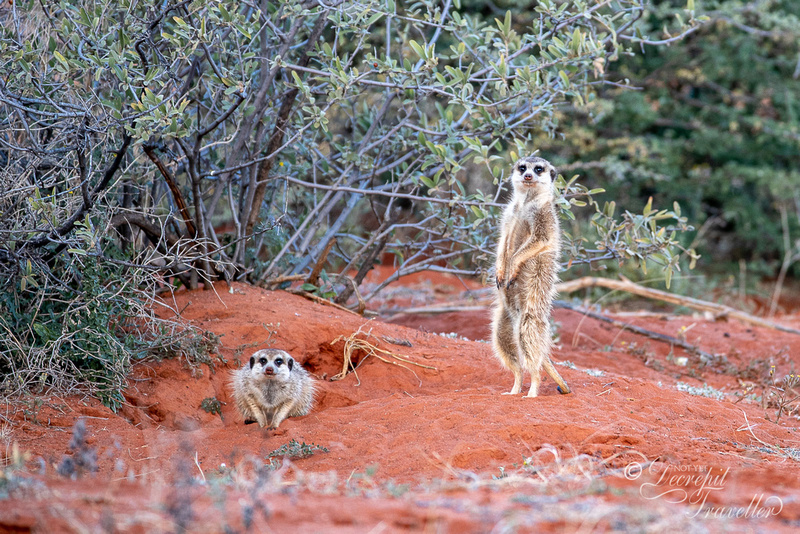 We had seen wonderful sights, spotted an extremely rare animal, and captured photos of a gang of wild meerkats in their own habitat - it had been a day in which nature was a balm to the wound which still exists despite our son having died so many years ago.

Estelle Anderson(non-registered)
Congratulations Roz on a really informative and very delightful post. I loved reading about all the animals, the rich descriptions you provide, and about all that you saw. Your photos, as usual, are magnificent. They greatly added to the wonder of your story / adventures.
Margot Howell(non-registered)
Wonderful photos of some unusual animals. Thank you for sharing them and the information accompanying them. As long as you are travelling you cannot say "the decrepit traveller"!
Not Yet Decrepit Traveller
Thank-you so much, Georgina! I can’t help but agree with Ernest Hemingway. Africa is a wonderful place with amazing animals and stunning landscapes. I’m glad to know that my images are bringing this awesome country to you!
Best wishes, Roz.
GGeorgina(non-registered)
Another fabulous post, Roz and I am completely hooked now on your African adventure. The name "Painted wolves" definitely sounds appropriate. The blue hills, pink sky and what a beautiful it must have been...I can only imagine. Ernest Hemingway once said " I never knew of a morning in Africa when I woke up and was not happy" - I am seeing what he meant through your photos.
Not Yet Decrepit Traveller
Thank-you so much, Elisabeth! I am very glad that you enjoyed reading part 2 of our Tswalu adventure, and really appreciate your empathy with our feelings of loss, particularly at that time of year. I try to do what little I can for the animals under threat from those who contribute to the trade in animal parts by donating and mentioning in my writings how it makes me feel. I don't believe anyone could travel to see these animals wild and free without becoming passionate about their fate, which is in the hands of we humans.
No comments posted.
Loading...
Subscribe
RSS
Recent Posts
India - exploring Delhi Ranthambore Part 2 Tigers at the River Tigers of Ranthambore Tswalu, the Kalahari, Part 3 The Kalahari : Tswalu Part 2 Kalahari, Tswalu, Part 1 Mala Mala Sable Camp Part 1 Mala Mala Part 2; South Africa; Kruger National Park Tanzania - The Serengeti Part 2 Tanzania : The Serengeti
Keywords
photography Travel blog landscape travel arctic blog india walrus seal svalbard
Archive
January February March April May June July August September October November December
© Not Yet Decrepit Traveller
User Agreement
Cancel
Continue