We anchored in beautiful Magdalena Fiord and I had a better night without the engine noise boring up through my pillow. 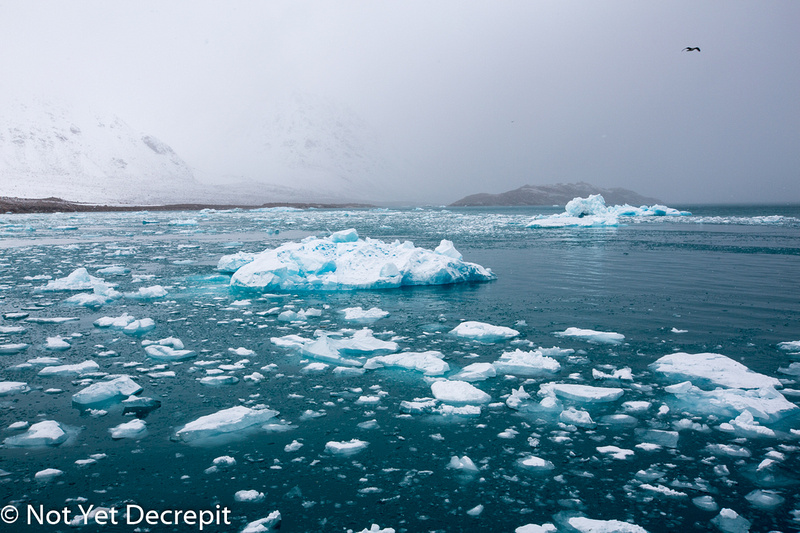 We were just having a wake-up coffee in bed next morning when one of our party hurried down to tell us they had spotted a polar bear and everyone was taking photos of it! Yikes! I battled to find my stuff and get heavy gear and mountain boots on quickly - but by the time I got on deck it was gone! Damn and blast. Should have gone out barefoot in my pyjamas, despite the cold!

The poor starving creature was scavenging for what it could find along the rocky shore. We all dashed to get our heavy gear on and into the zodiacs to try to find it. In the end we spent hours freezing and never saw the polar bear again. It was snowing and my old lady plastic poncho came into its own! It kept the wind and snow out and I was fairly comfortable but my husband got sopping wet from waves splashing over the side.

In the afternoon, seals were seen not far from the boat and another trip in the zodiac was organised. I was not feeling well after our freezing wet morning, and both of us declined, thinking we could see the seals quite well from our boat. It goes without saying that those in the zodiacs then went off round the corner and disappeared for ages. I was gutted, thinking they had spotted a polar bear. Then they returned - no polar bear - but they had found puffins! Soooo jealous!

We woke late next morning and had a mad scramble into all the layers, then went to explore the abandoned Swedish scientific research centre of Kenvikken. We were not the first. Passengers from another ship were exploring the icy wastes. 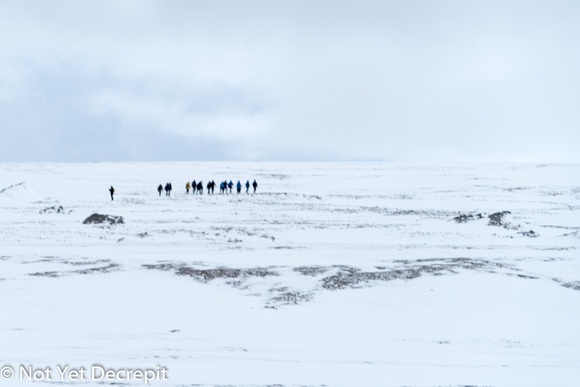 Wooden buildings in the settlement had shutters to keep out blizzards. They were dwarfed by the enormity of the frigid Arctic and one couldn't help but feel how harsh and hostile the environment was for those who worked there. This member of our party, checking out the sauna, has a gun. One or two of our guides carried guns at all times in case of a polar bear attack. It would be dreadful to have to shoot one when they are becoming so scarce. Who could blame them for going after a food source on their territory? Luckily that did not happen on our trip.

The Swedish researchers had made themselves as comfortable as possible, with a sauna and other mod cons. The loneliest dunny in the world sat out away from the other buildings - 'dunny' being an Australian term for the outhouse toilet!

We explored the buildings. Bleached whale bones framed a doorway and skeletal remains  of various creatures lay on the snow. 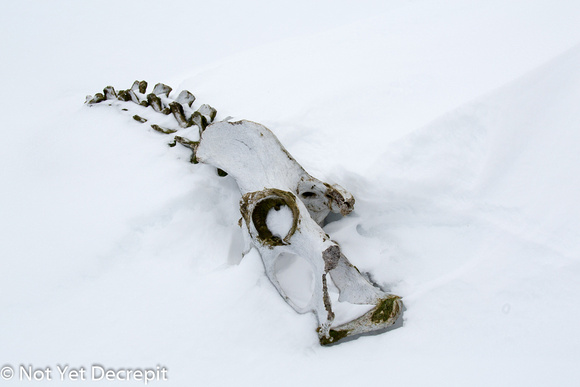 The other party of travellers regained their ship and sailed away. I quickly grabbed the Canon 5D with its 100 - 300 lens and steadied it on my husband's obliging shoulder to grab a shot before the sailing ship disappeared over the horizon. It was a wonderful sight which for me evoked the insignificance of mankind, dauntlessly pitted against the majesty and purity of the vast Arctic landscape. 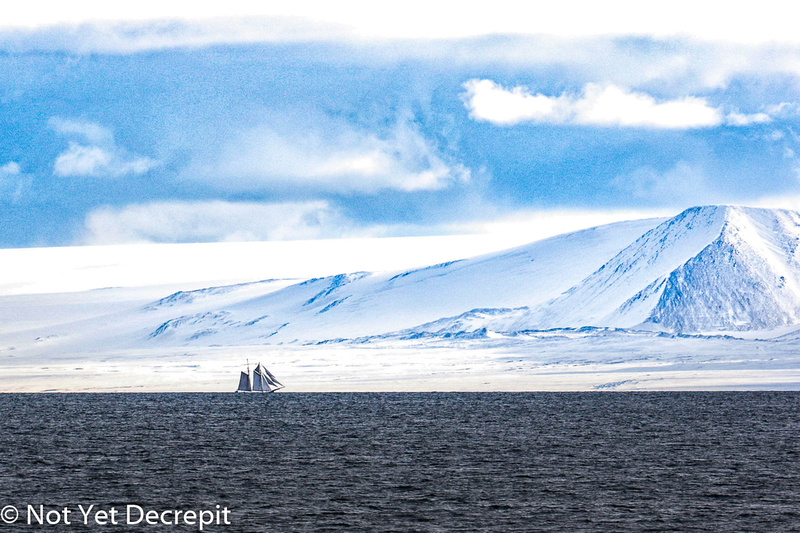 Then we, too, began the charge north trying to find sea ice (pack ice), which is receding more and more every summer. It took nine hours of sailing before we ended up finding the outer edge of the sea ice at 83 degrees of latitude - not that far from the North Pole! We briefly relished being the northernmost people on the planet. 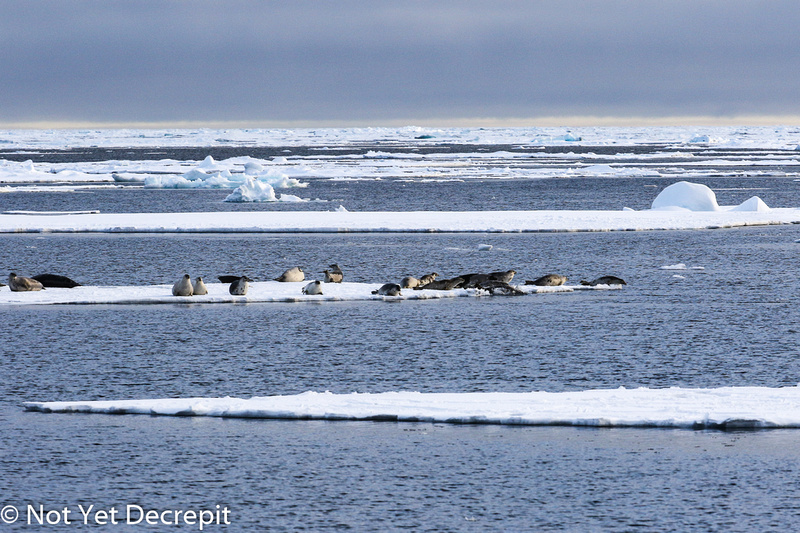 Later we found out that in October 2016, the year we were there, the sea ice moved south later than at any other time in recorded history.  This would leave the mother polar bears even worse off and possibly unable to survive because they could not reach the sea ice where fat seals, their main food source, were clearly flourishing and fat as butter. 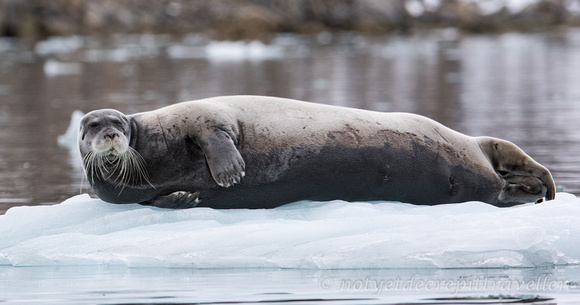 Our expert wildlife guide was giving a talk about polar bears when an alarm rang. The bridge had spotted a blue whale, a very rare sighting! Such excitement! We all raced on deck to take photos, some of us still in T-shirts but insulated against the cold by the wonder of this sighting. For this one I managed to prop heavy Big Bertha on the side of the boat. It was truly a marvellous experience to capture images of the largest mammal and one of the rarest creatures on this earth. Our guide told us that once a blue whale fluked, it would dive for 20 minutes, so we wouldn't see it again. 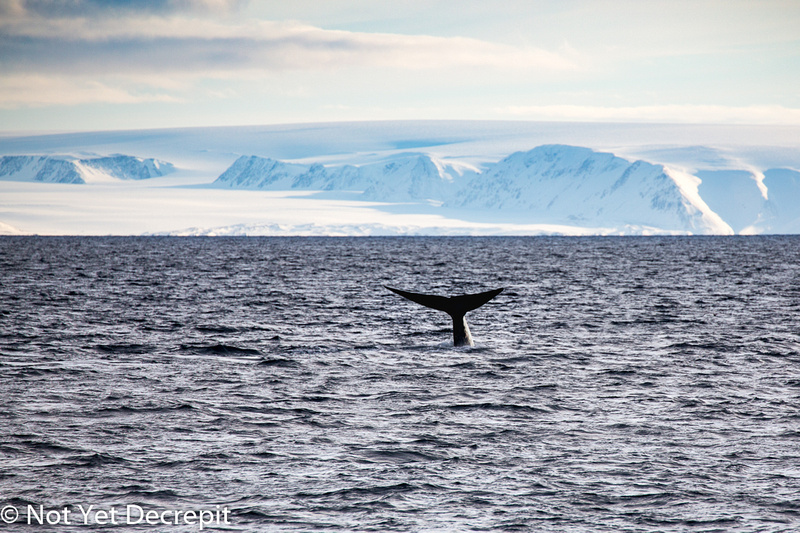 However, this one was like the humpbacked whales we've seen in Queensland waters - it played around the boat, diving and returning, with a definite awareness and interest in our presence. It was a female with a calf. Perhaps that is the reason it didn't vanish underwater on the first dive. Even the calf practising its dives was bigger than our boat! 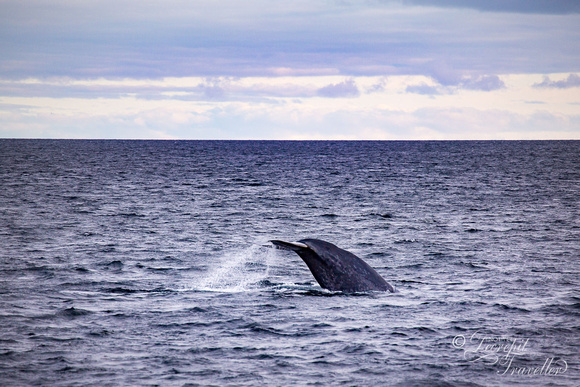 That night we photographed an icy wonderland in the evening light. A lone walrus comfortably ensconced on an ice floe showed just how much at home these animals feel in such a vast, forbidding environment.

We donned all our layers and went out in the zodiacs the next morning, but no luck, no polar bears, no nothing and although I was wearing every stitch I owned, it was FREEZING, despite the fact that this was late summer/early autumn. In the afternoon walruses were spotted on an ice floe. Off went the zodiacs again with us aboard - we were determined not to miss out this time! Bouncing up and down in the zodiac made it hard to get good focus but I was fairly happy with this image taken with the Sony A7R Mk II, the kit lens 24 - 240mm at its full stretch of 240 mm. 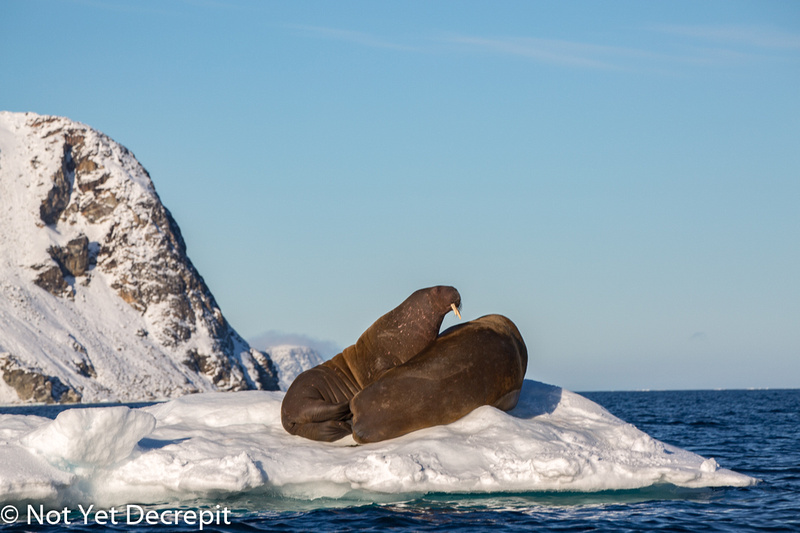 That night we ground our way through ice floes as we headed north. The noise in our bow cabin was positively scary at times. Our boat has a toughened hull but it is not an icebreaker. Once we got out of the fiord and into the open sea, the boat plunged up and down like a merry-go-round horse. I used the patch for seasickness plus seabands plus Zofran and fortunately avoided spending the whole night heaving in the freezing bathroom.

When we heard water sloshing around in our bathroom I got worried. We reported it to the watch officer and were assured that water comes up in the pipes if air gets into them. We tried to keep it at bay with our towels - otherwise we got an icy surprise when going to the toilet barefoot in the dark of night! 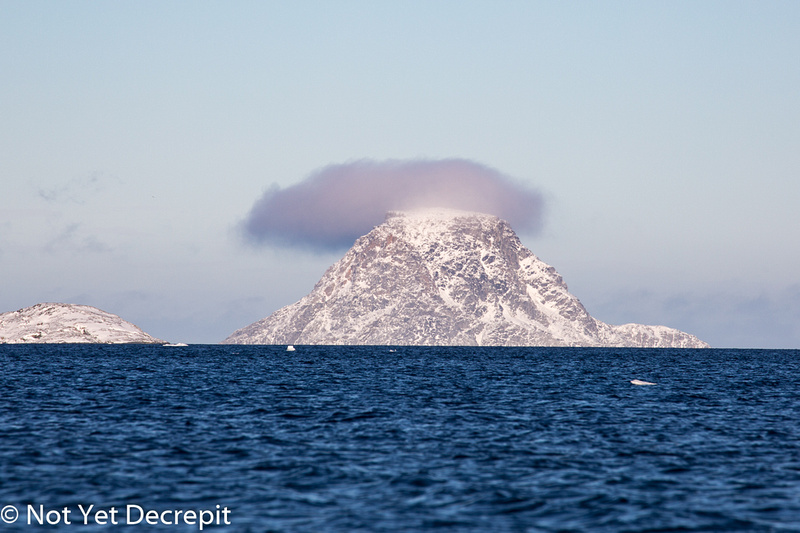 We were up at Seven Islands by this time. This is the most northerly part of Svalbard - Ross Island, wreathed in cloud.