When we got off the plane in New Delhi, the smell hit us like a slap. As we drove through crowded, chaotic streets we certainly knew we were entering a different world!

Our hotel was very comfortable and attractive with great service. We had the clothing for India pressed – it had been languishing in the ‘India’ case for more than a month.  These Indian laundry wallahs are super-efficient! Everything was back in a couple of hours. I was most impressed.

'Wallah' is a British name which is patronizing - but very handy and used by Indians themselves – there are dhobi wallahs (people who wash clothing) and Delhi wallahs and shoe wallahs, the list goes on and on - here's a rickshaw wallah. I have no idea why so many of them hold a cloth in their teeth.

The first two days, we had to get up at 3.00 a.m. London time to meet the guide at 9.00 a.m. Indian time. Not easy, my body clock had not adjusted and I was dead to the world when the alarm went off! We had a very interesting first day in Old Delhi, but it certainly was confrontational in terms of smells, squalor and filth. I’ve never seen so many flies in my life, even in Australia which is pretty bad.

The begging was not as upsetting as I feared. There wasn’t much pressure, no sights of people deliberately disabled that I had been steeling myself to endure. Most people were charming and friendly, while old Delhi was certainly exotic! 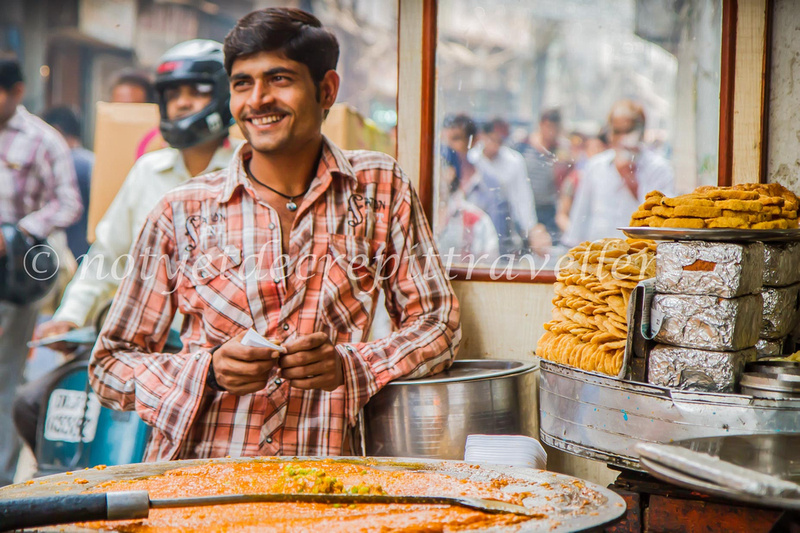 It was difficult to get good photos – first in the car, trying to take photos out of the window; then jolting along in a rickshaw trying to get a steady shot around the back of our rickshaw wallah – we found it was better to shoot backwards. We walked along dirty alleyways with great crowds jostling – many potentially fantastic shots were a bit blurry! 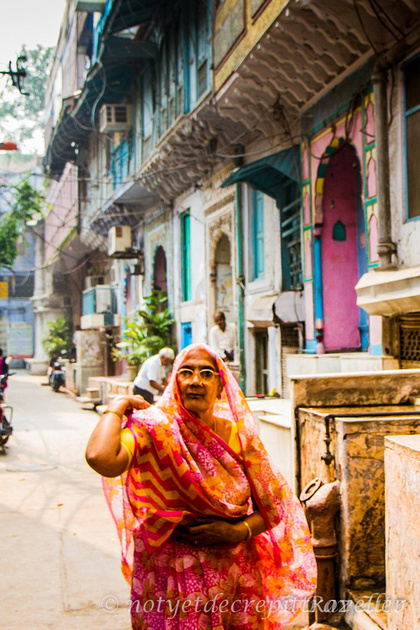 People were always smiling and when asked if I could take a photo they responded positively and generously. Meeting the people was truly a highlight of our  time in India.

The Sikh temple was way out of our comfort zone! I had been warned to take cheap shoes, easy to slip off, so I could leave them at the door of the temples and walk round in my socks so as not to be stepping on a floor that was none too clean and gobbed with spit here and there. However, the Sikh temple required everyone to take off their shoes, socks, and walk through a pool of water to ‘wash’ their feet. The water had already washed gazillions of other feet much dirtier than ours and we cringed - but survived without foot rot!

It was an interesting temple, quite like a mosque inside. Our guide explained that they run a soup kitchen for anyone who is hungry, and don’t badger people for money. We gave the gentleman in white a contribution, though he never asked. 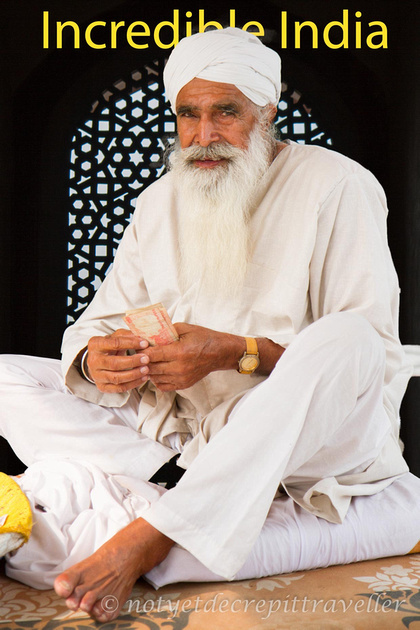 Their holy book is kept in the shrine under gilded columns with a canopy. A group of men chant and play sitar all the time, honouring the book, which is taken to another room to be 'put to bed' at night.

Part of the temple complex had a pool like a Roman bath, full of huge catfish. A guy stripped off to his flimsy underdrawers, handing each item of clothing to his wife. I went to take a photo, but a guide started shouting. Francesco thought he was shouting at me. 'Stop taking photos,' Francesco ordered me urgently in an undertone. In fact, the guard was shouting at the guy in his underdrawers, who went into the pool and commenced tipping water over his head with a silver pot and washing himself. You are not allowed in the water, and the guard was furious with the bather, not with me! Sadly, having been told to desist from taking photos, I have none of this guy performing his ablutions.

The not yet decrepit traveller is not intrepid, and I was paranoid about what I ate, not wanting to get 'Delhi belly'. My husband was more adventurous, but outside Indira Ghandi's house he was overcome by cramps. He had to go to a public toilet just outside the gates, which smelt atrocious. As I waited I was invited to try the patties sold by snack wallahs....needless to say, I politely declined although they looked delicious! 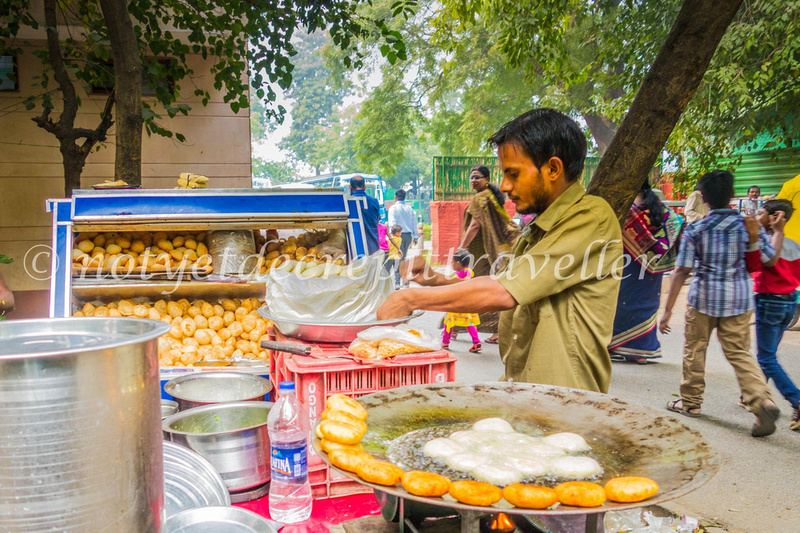 Hordes of schoolchildren kept patting my back.  When I looked around, they smiled shyly and said, ‘Hullo!’ Our guide said quite a few from out of town have never seen a European, and we encountered a lot of curiosity.  People often asked us to pose with them for photographs to show to people in their home villages.

Long crocodiles of schoolchildren with hands on the shoulders of the child in front filed through Indira Ghandi's house with never a glance to right or left, filed outside again and went back to school!

Well educated Indians speak excellent English, often better than we do in terms of vocabulary, and they use archaic words like ‘dastardly’, saying things like ‘And how is your good self?’ I found it most appealing. Here is a school 'bus' with children coming home from school.

The next day we went to the Tomb of Humayun which is very well proportioned and gracious. It is considered the predecessor of the Taj Mahal.

The vicissitudes of travelling in a group manifested themselves when I saw a picturesque pair of cleaners in the grounds and took a photo. I knew immediately that it was slightly out of focus and went to take another, but the group called me 'Hurry UP, Roz!' There was no time to attempt to capture a better image.......Grrrrr!

We hurried on to the Qutab Minar, a Muslim tower built much earlier. Its red sandstone was very ornately carved and aesthetically pleasing in its simplicity. Nearby is an iron pillar which has never rusted, despite being there for about 1100 years.

The Muslim monuments are set in lovely gardens. The Farsi word for walled garden, 'pairi daeza',  came into the English language as the word 'paradise'. There was a lot of walking and climbing steps which I found pretty hard with my severely arthritic knee, but managed.

Driving anywhere took forever. The traffic is mad, with whole families on motorbikes and ladies sitting sidesaddle on the back of scooters with their graceful saris draping over the wheels - an accident waiting to happen!

We were constantly astonished by squalid encampments of people along of the road. Chaos, dust and rubbish was everywhere, people fast asleep in the middle of it all on the ground or making lunch in assorted pots and pans in a little shelter they'd created against a fence, while tiny babies played on the median strip of chaotically busy roads.

The guide told us some of them were gypsies and others were people who work on the road and move along as they finish one section to camp alongside the next part they are mending. I think many were homeless and he was fudging. (An Indianism!) 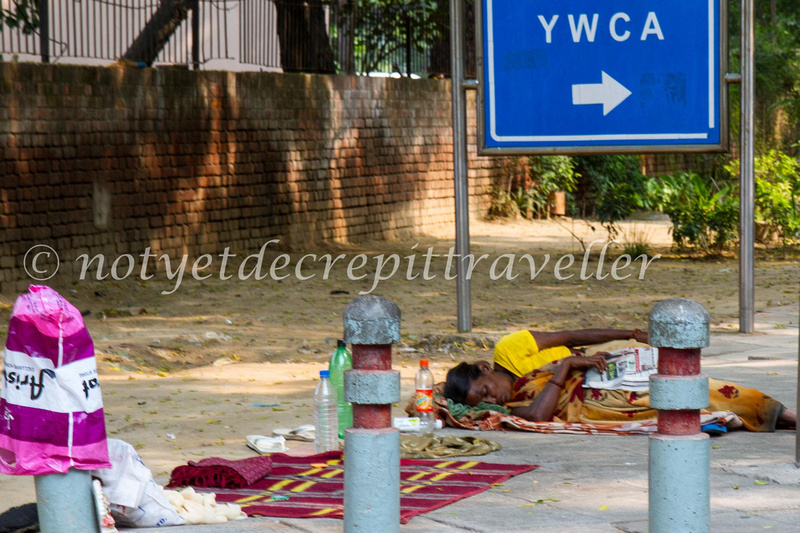 Here is today's offering from the Hindustani times: 'Ragging' - the teasing of new students at university. I've read many of these words in Billy Bunter's Annual back in the 50's!

Everywhere, people were selling food and carrying incredible things on bicycles and rickshaws - a wardrobe, a stack of bamboo ladders, piles of steel rods for concrete reinforcements.

Trying to get photos was very hard while the bus was moving. Usually the most striking things, like  cows in the middle of the road, whisked by while I struggled to focus.

We lunched at a large touristy restaurant with a gigantic, confusing menu. We ate vegetarian food throughout the trip on the basis that undercooked veges are less likely to harbour bacteria than undercooked meat. However, a spicy crumb topping caused me to start coughing again.

I was still coughing hours later. Indian spices are pretty rugged. I'm already tired of eating safe food and trying not let water get in my mouth or nose while washing my hair!