We moved down Leiberfiord from Texas Bar until we reached Monaco Glacier at the end of the fiord. It is the biggest glacier in the area. Off we went in the zodiacs. This time we were with Gerry, Chris and Phil. They are all great photographers and fun people to be around. Chris was using a Leica and a film camera, I was in awe at how he changes a roll of film, so swift and professional! 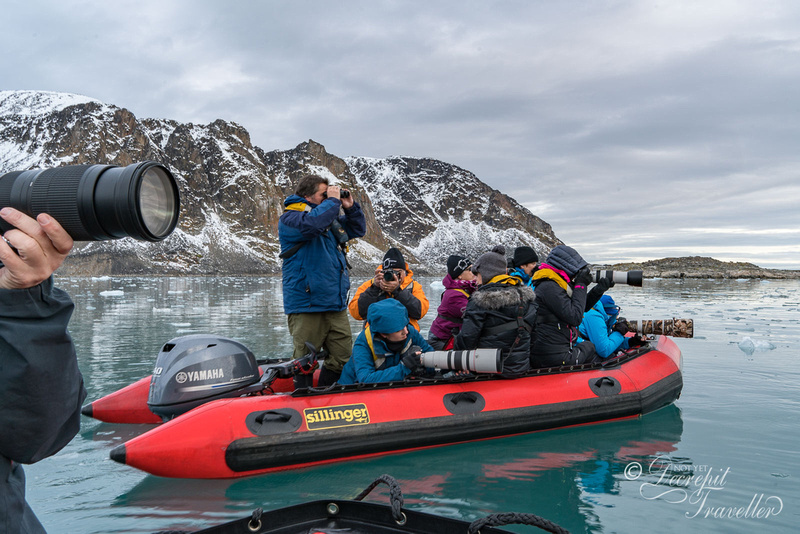 It was freezing, with tiny snowflakes. Nan was blown away by how they each have a perfect, individual pattern. I remember that from the Ice Hotel. I’ve never seen it again till now – I think they are drier in the coldest places on earth and that’s why - bigger, wetter flakes don’t have those delicate, lace-like patterns, each snowflake having its own intricate structure. My breath was forming clouds in front of my face but the glacier was stunningly beautiful with the sun trying to beam out from the clouds. It was an extraordinary sight, with little ice floes and the sun reflecting on the water. 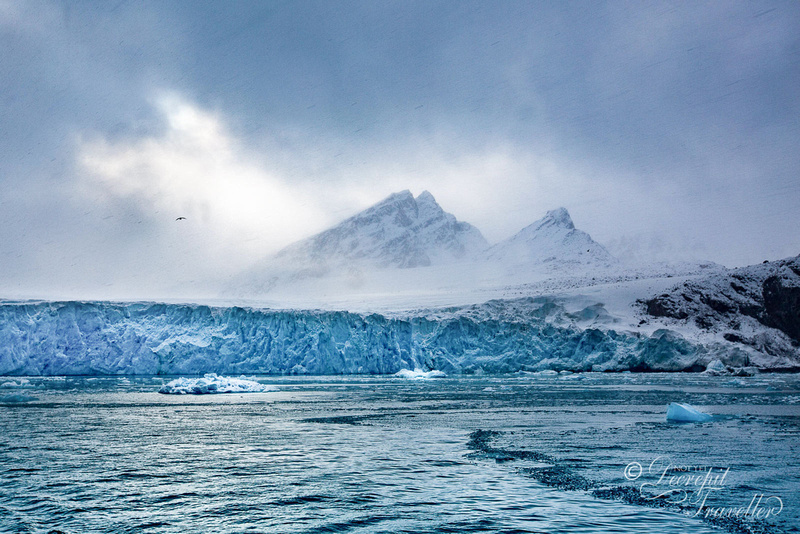 Gerry van der Walt of Wildeye is very helpful and positive. At his suggestion I took some portrait (vertical) orientation shots as well as landscape (horizontal) images and I was happy with this one of Monaco Glacier. However, I was discontented with the sky, thinking I had a spotty image – but then I realised it was tiny flakes of falling snow! 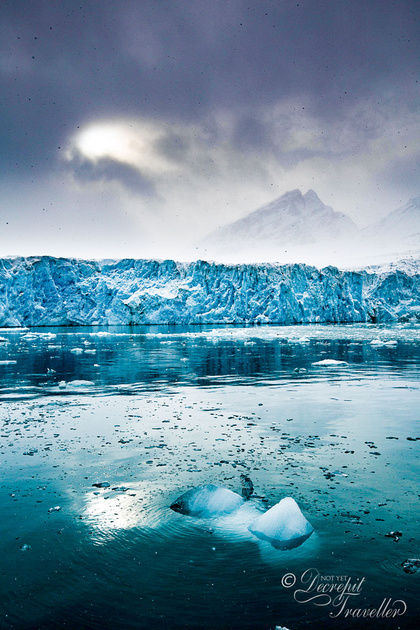 We saw a bearded seal, the big white whiskers adorning a tiny head on the end of a hugely plump sausage-shaped body. He languidly waved one flipper, snow falling from it onto the ice floe. 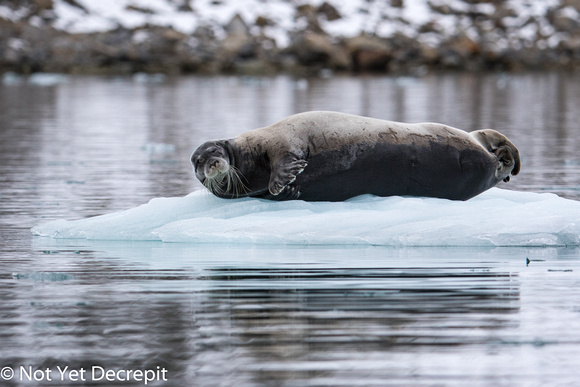 In the same area there was a walrus. Both of them had hauled up onto small ice floes. We were careful not to disturb them - they need the opportunity to warm their bodies and rest. 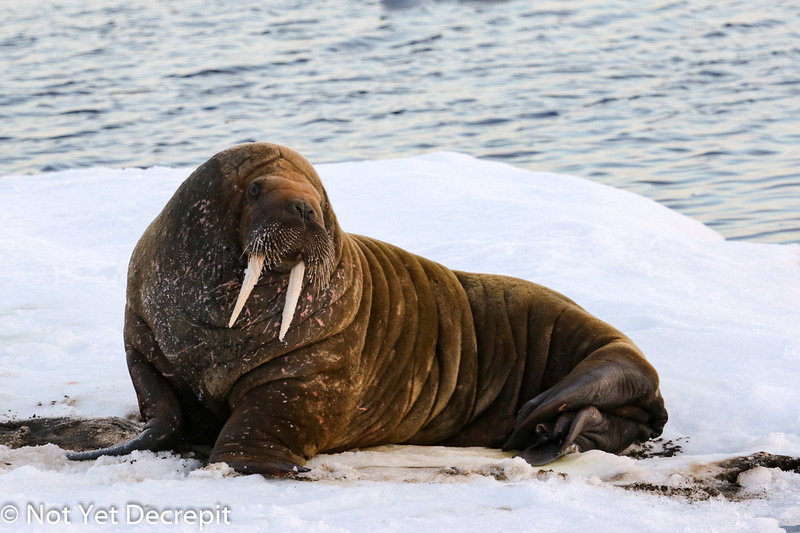 The water was calm, the reflections almost mirror-like. Birds like Northern Fulmars were happily adapted to the frigid conditions. My husband took this image which clearly shows the beautiful markings of this bird. To be honest, despite searching, we don't know what it is. Can anybody help?

The glacier made cracking noises and our zodiac shuddered every time it hit even a tiny ice floe. I watched in considerable trepidation as the craft with our daughter in it edged very close, dwarfed by the face of the glacier. What if the glacier calved? There was an ominous creaking noise and a small piece fell off, but fortunately, nothing huge! 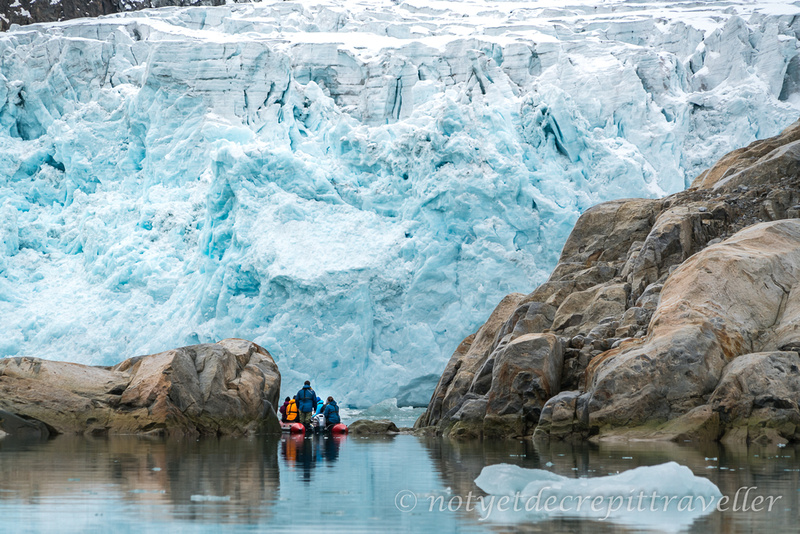 I had the lighter Sony. The focus had been playing up. Rather than having an instruction booklet, you look up your problem on the internet. The only trouble was, we were out of signal range for the whole trip. I squeaked with joy when it finally secured good focus on what I was told were rare Arctic gulls. However, this was the birding equivalent of the bum shot - the photo doesn't show enough frontal features to identify them conclusively as such. Back home in Australia, I found out that the issue with focus wasn't a camera fault - some obscure thing had been changed in the menu, possibly when we had the sensor cleaned after a dusty trip in the Kimberley. 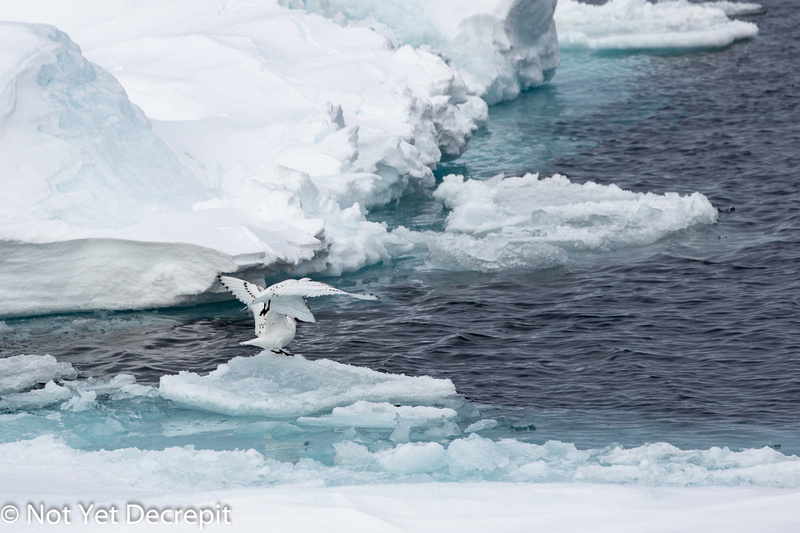 We headed back to the boat with the guys boyishly planning a prank. We were going to be the first to get back. They decided to usurp the two ‘thrones’ always taken by 'the Dolly Sisters'. They got their beers and grabbed pride of place. I couldn’t resist a photo of their roguish faces!

That night after dinner, many went ashore at Virgohanna to see the whaling station. We heard the story of how Andrée, a foolish and famously over-confident would-be explorer, prepared his folly. He wanted to fly over the North Pole in a balloon. Completely ill-conceived, the trip was disastrous. They took off from a place noted for wind which came down off the mountains. 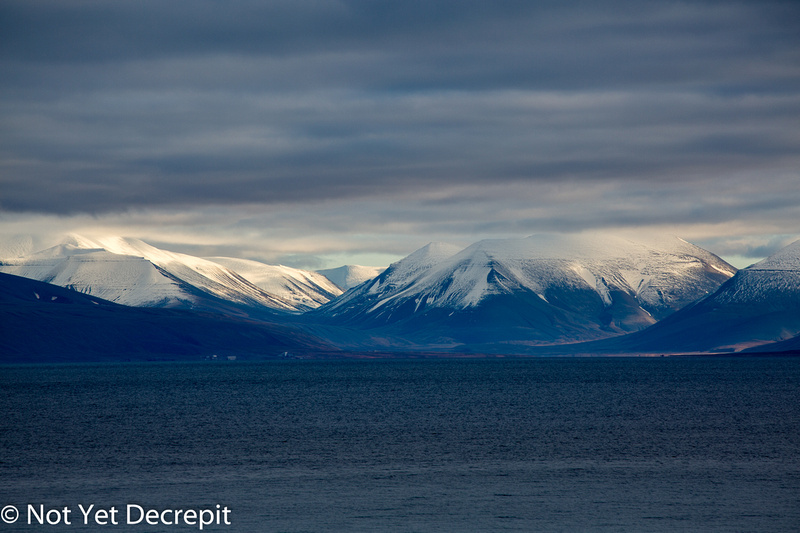 Surprise, surprise, the balloon was pushed downwards immediately by the wind, with the men madly jettisoning weight to try to keep it from plunging into the sea. They succeeded, but had thrown most of their food overboard. In the end the balloon crashed on land. Despite their efforts to survive, he and the two idealistic young men he had enticed into his wild scheme perished. 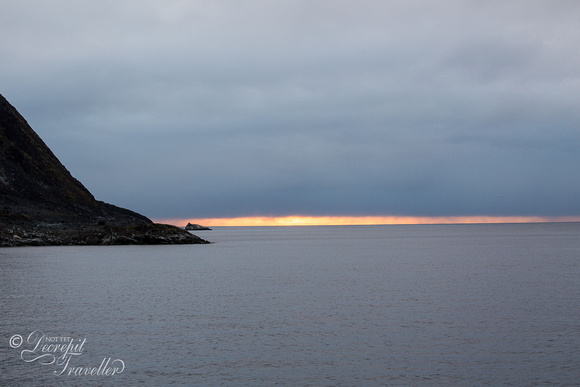 I chose not to go ashore and scramble around the whaling station in the night-time. I  struggle to walk on level surfaces even in daylight. Later we heard that several people had nasty falls on the slippery rocks in the dark. I was glad I had wimped out. They saw the whaler’s graves, opened and scavenged by polar bears, and the enormous whaling station where blubber was rendered. We heard that whales towed there for processing  bobbed on the water in such vast numbers that people could walk on their carcasses from one side of the bay to the other. 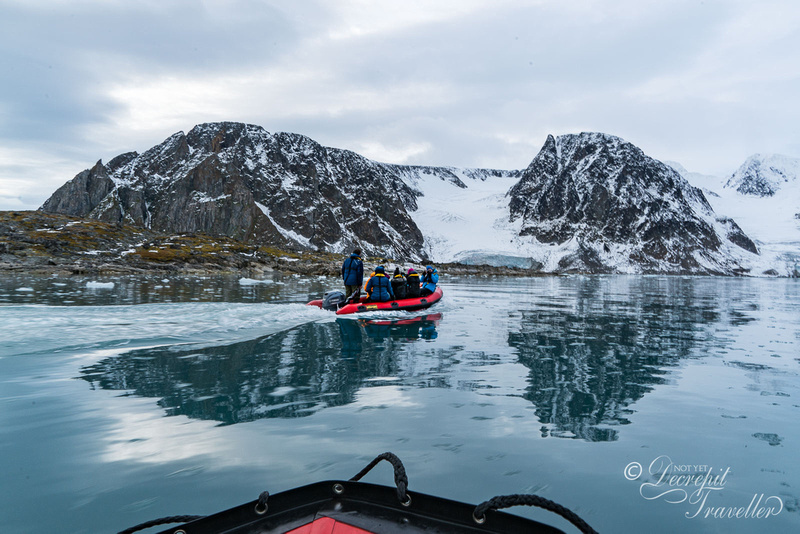 We eased into a very peaceful small fiord with marvellously tranquil water and superb reflections. Words can't describe how truly stupendous Svalbard is, formidable and daunting in its hostile frigidity, yet completely fascinating in its sublime wild beauty. It was a privilege to experience the pristine nature of this remote wilderness, largely unsullied by man. 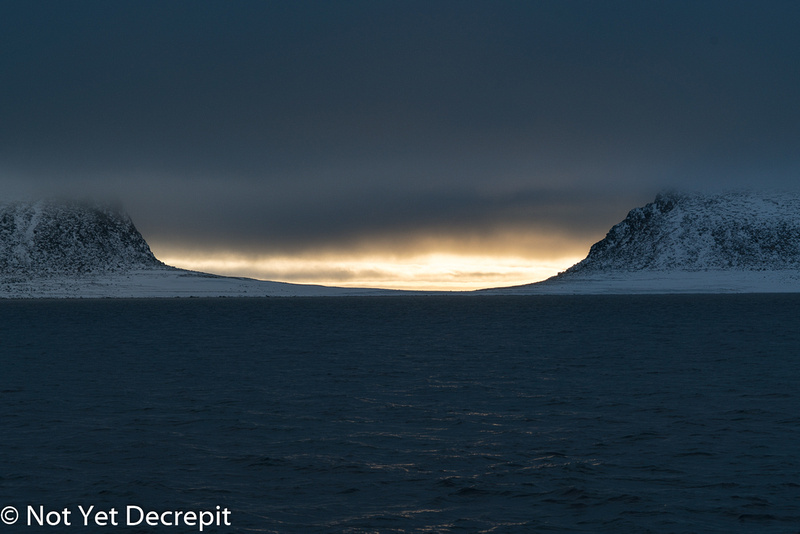 Our last day and everyone is feeling regretful to be soon leaving this place of wonder. 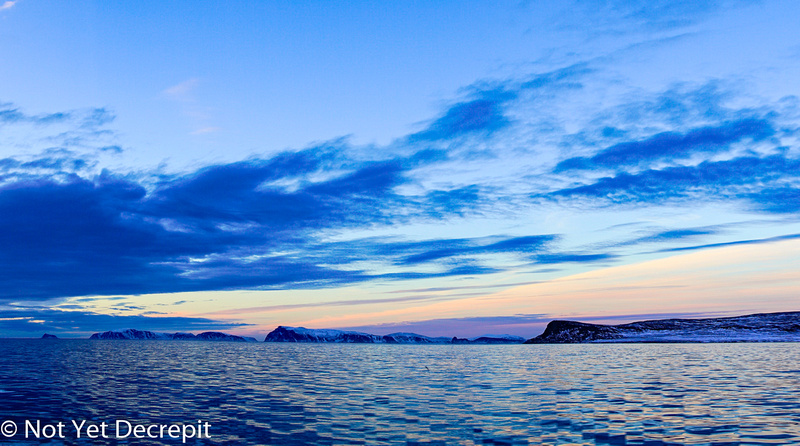 We went ashore at Alkehornet. As always, given my bone on bone arthritis, I was in the group on the ‘short hike’. I felt very dizzy and kept losing my balance. Our group slogged up a short steep slope from the beach. I felt even worse. A surgeon who had dropped out of the long hike group and joined our lot said,  ‘Are you feeling short of breath?’ ‘Yes.’ ‘Do you feel dizzy?’ ‘Yes.’ A few more questions made me feel as if a heart attack was probably imminent as the ground heaved beneath my feet. 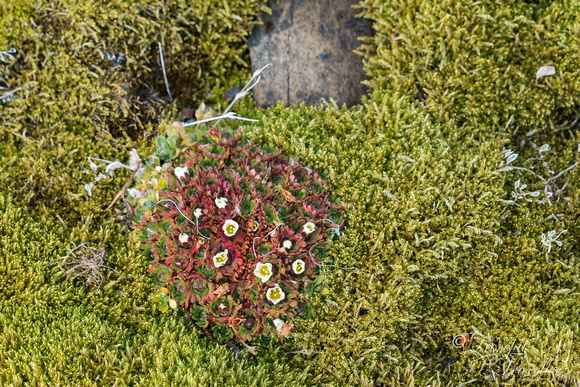 Then, obviously having made his mind up that I was not going to die, he said, 'Right. We have to go up this ridge’. Weakly, I replied, ‘I don’t think I can.’ He set off up briskly. Someone whose husband is of the same profession said to me later, ‘Typical surgeon!’

I had no choice but to try and follow. We had one crew member with a gun trying to watch over our group in case a polar bear found us and fancied a tasty morsel or two. The group were not allowed to split up. We straggled along in the surgeon’s wake as he strode out in search of deer. Our group became more and more strung out as we attempted to follow him to the top of the ridge. Our gun-toting guard didn’t know what to do when his charges failed to stay together. 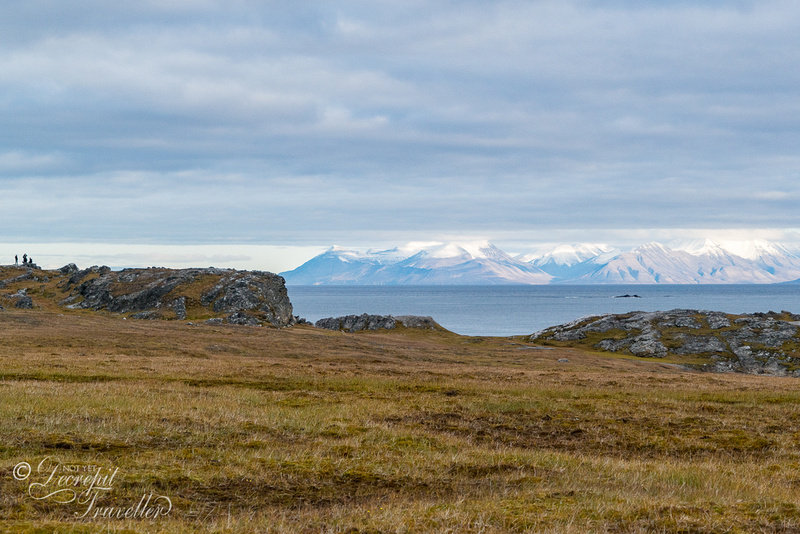 Then our guard got a message from crew members on the ridge.They had spotted deer down the easier slope where I had hoped to go in the first place. Our fit and able walker was off, setting a rapid pace back the other way. He soon left the rest of us dotted across the hillside, our guard in a panic looking from the front of the line nearly a kilometre away to me at the tail end tottering along. The land was going up and down. I looked like a drunk and felt nauseous. Belatedly, I realised I had severe vertigo. 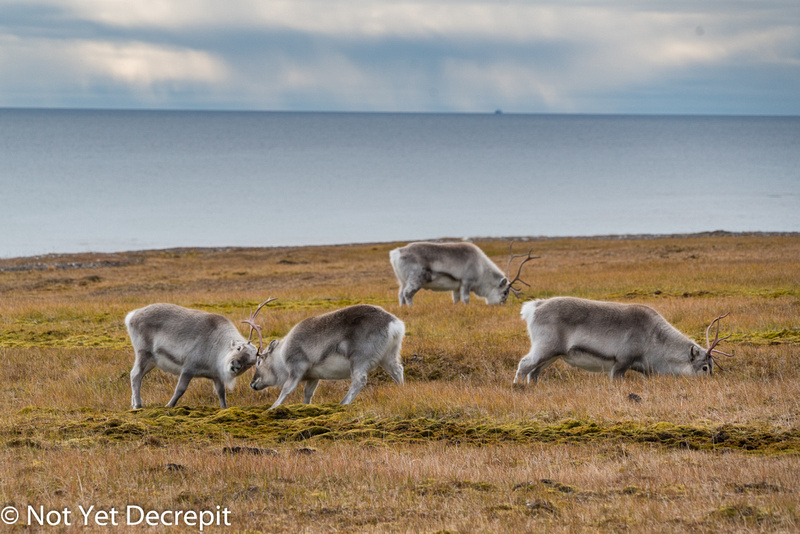 Then a shout went up….an arctic fox had been spotted coming down the loose scree of the mountain slope ahead! How thrilling! Our surgeon took off like a racehorse. My husband forged ahead with Big Bertha. That meant I couldn’t use it - but he managed to get some in focus! The fox, not bothered at all by the attention, wended its way down the slope towards the others who were way ahead of me. The photographers later complained bitterly because  someone who shall remain nameless had planted himself right in front of them to get an excellent view of the descending fox, and photo-bombed their shots! I was way back so his positioning didn’t bother me at all. I had nothing but a 70 -300 lens but I took photos anyway. 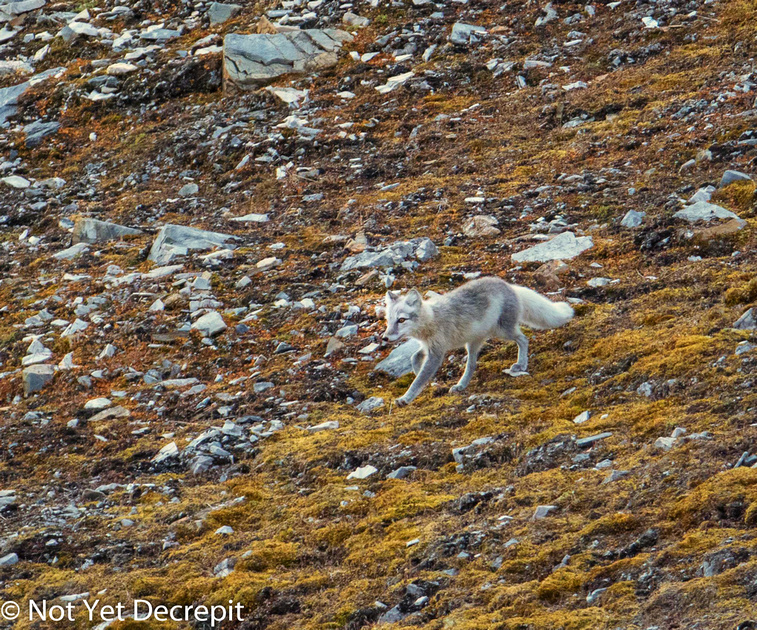 My images are a testament to the full-frame Canon 5D Mk III. This has been very heavily cropped, but the detail is such that you can marvel at how the fox's summer colouration changing to winter white blends in perfectly with the scree-strewn hillside.

On we slogged towards the deer, our group strung out across the shaley face of Alkehornet with little rock flowers sheltering in crevices. The poor crewman with the gun was in a blue funk as the leader disappeared over the ridge. No prizes for guessing who that leader was. Luckily no polar bear came along to snaffle the straggler (ME!) The sphagnum moss was soft. It did my knee no favours as it yielded spongily at every step, but eventually I reached the play-fighting deer.

I staggered up to the others to find my husband with Big Bertha, photographing a stag lying down. I wrangled Big Bertha for myself and propped it on a rock, getting some pleasing images of the stag’s head with the beautiful rich autumn colours of the sphagnum moss behind. 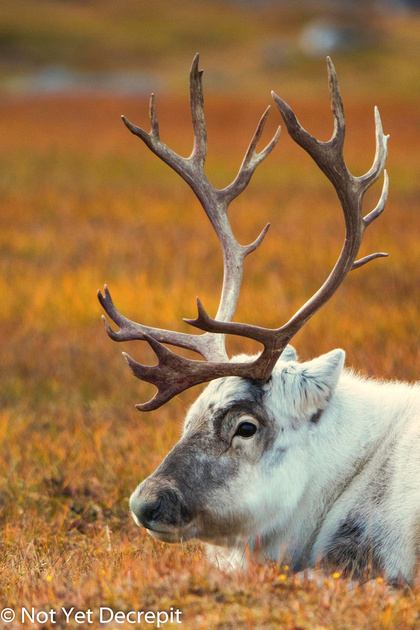 We took many photos of the deer. They were so warmly rugged up in thick fur that they resembled caribou. Some were practising their fighting skills. A member of our party approached so closely that you could see the wrestling deer saying, ‘Back OFF! Can’t you see we’re busy?’ 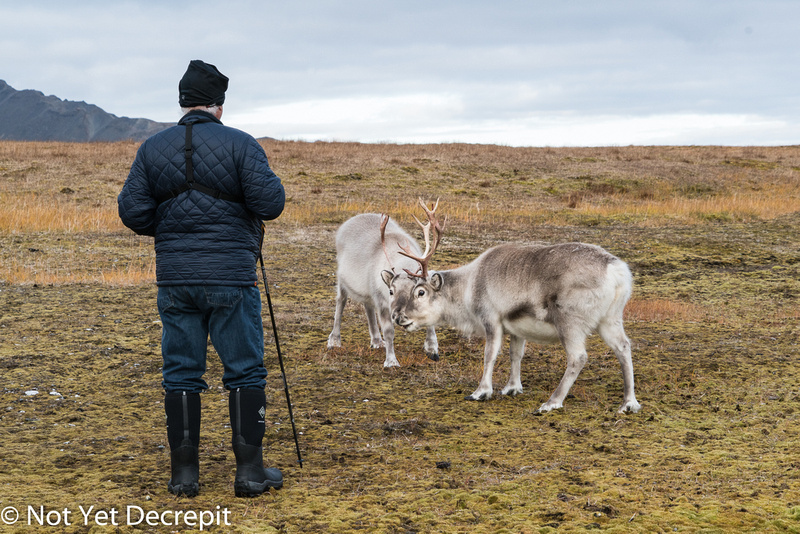 I was destroyed by the time we got to return to the boat. Our short walk had turned into three hours of far more arduous hiking than I could imagine being able to complete.

Never mind, the images of Alkehornet in its warm autumn colours were more than adequate compensation, while across the bay we witnessed the beautiful changing light. 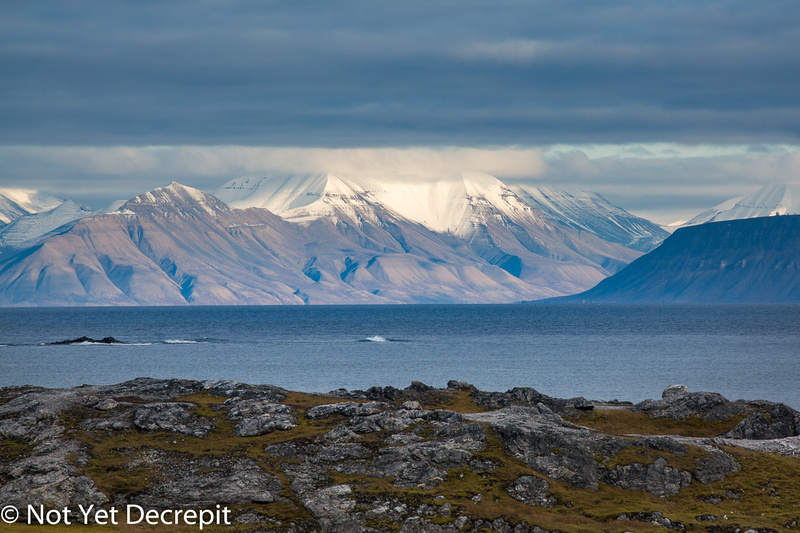 On our last night in the Svalbard Archipelago we were treated to a magical tranquil evening, with reflections of the mountains mirrored on the water. Our daughter suggested we bought champagne for everyone, to celebrate an unforgettable experience and the cameraderie we had enjoyed with our delightful companions. ‘This champagne is a gift from the First Family!' said Chris, ever the life of the party. A little glacial ice, anyone? 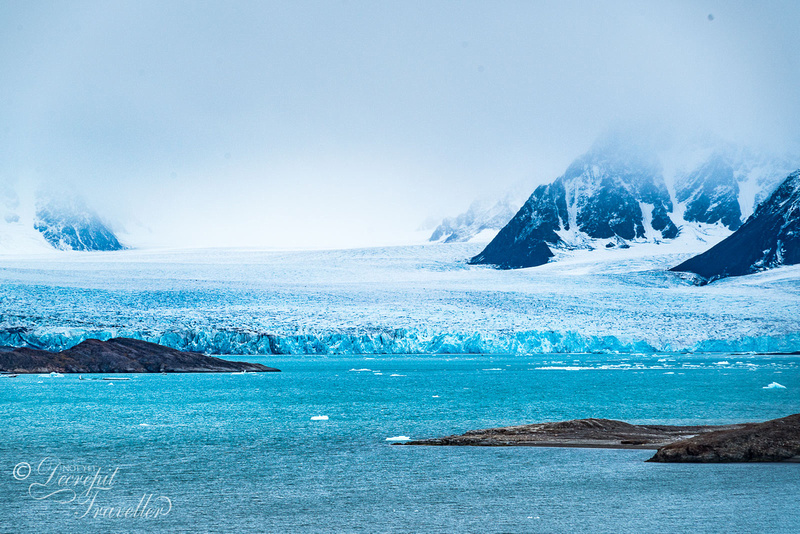 After breakfast we lugged the bags up those steep stairs from our cabin – luckily Gerry and Phil gave us a hand with the heaviest ones. We were dropped off at our hotel first. Feeling intense vertigo, I lay down and slept. After lunch our daughter went on a 5 hour hike with some of the others and a guide. They saw a magnificent arctic fox in full winter coat! It was not at all shy and she got some stunning images.

When I felt better we went to the museum, which was very interesting - but obviously I would much rather have taken photos of the arctic fox! It is very frustrating not to be able to do the things I could do when I was younger, but I was truly blessed to be able to  experience the frigid wonderland of the Svalbard Archipelago. I will never forget the purity and stunning beauty of the Arctic. 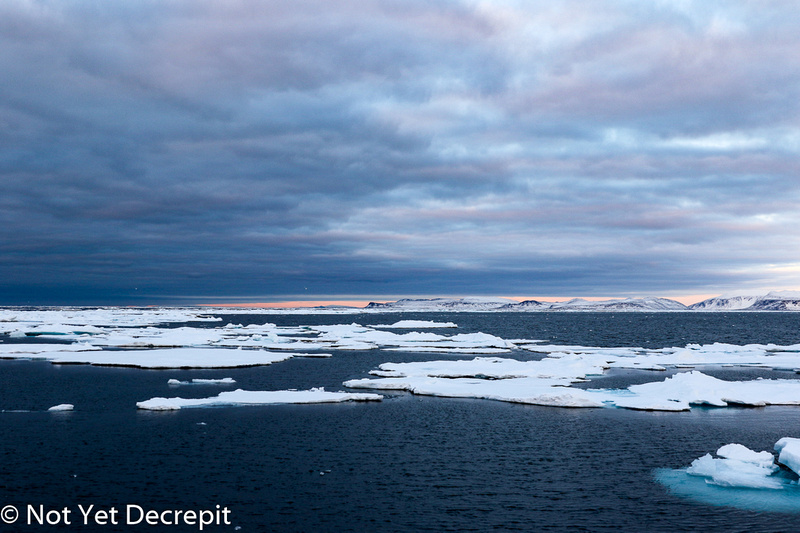 It took more than 3 weeks to get over the vertigo.....I was starting to wonder if it would ever leave me. Next year I think I’ll stick to dry land!