We were getting closer to the sea ice and seeing plenty of incredibly rotund seals, but no polar bears. We tried to photograph the seals but could only get them from afar, they were very wary and as the boat drew nearer they all slipped into the sea, first one or two, then a wholesale exodus. 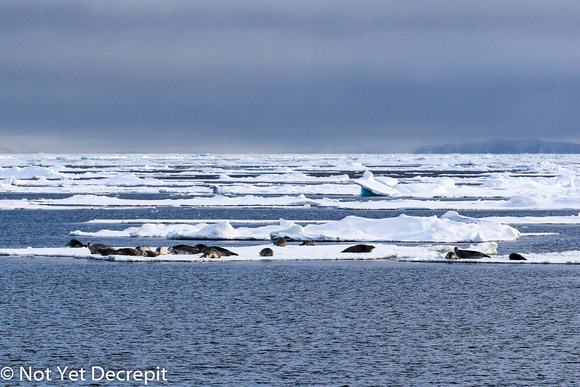 Our guide told us that the male bears have taken to staying on the sea ice so they can get at their natural food but the females have to go ashore to give birth in winter. Throughout the long winter they feed their cubs incredibly rich milk, while having no source of food themselves. This is normal, but now the sea ice is too far north for the mothers to reach it after coming out of their snow caves. They make their way as far north as they can, yet with the ice so far from land it is impossible for them to reach it, because their cubs still cannot swim far without freezing. Already female polar bears are having one cub to try to survive themselves - they scavenge, eating bird's eggs and what they can find, but what they need is to get to the sea ice where they can hunt their natural prey, seals. 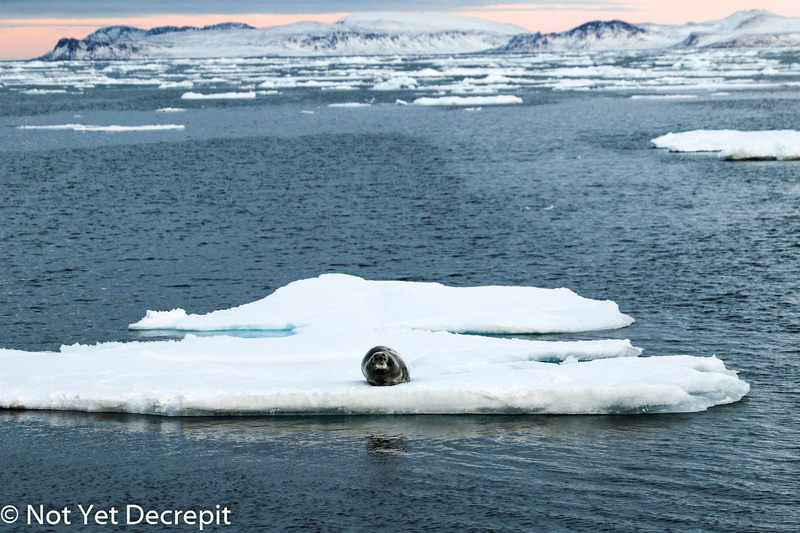 We got to 83 degrees north before we found the sea ice. It was very close to the North Pole, but we were still on mostly open water. All of us were out on deck or up on the bridge with binoculars, scanning assiduously for polar bears. Our guide was getting very tense about our failure to find them. 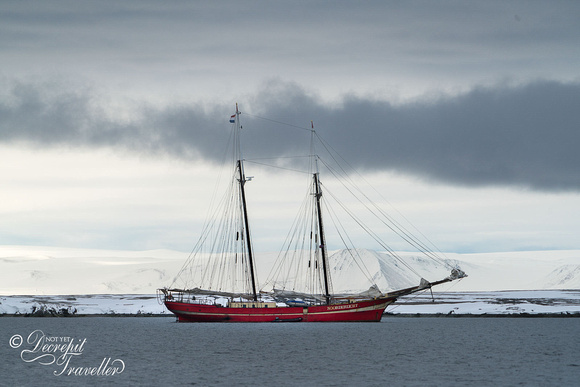 The sailing ship we had spotted earlier at Kennviken saw two male polar bears on the ice and sent us the coordinates. Sadly, despite making all possible speed, we only found their footprints by the time we got there. Though we hunted all afternoon, they were not to be found. One doesn't realise the vastness of the Arctic and how scarce polar bears are becoming. It made us all very sad as we reflected on humanity's careless use of fossil fuels and the advance of climate change which is impacting so heavily on the environment of these specialised, unique creatures.

What is that little red thing on the ice floe? You may well ask.

It was decided to tie up to a large ice floe overnight so we wouldn't have to slog back to land to anchor. We were at dinner, but noticed a crew member out on the ice floe with a peg and cable to make the boat fast. We began drifting away. Our trusty crew member was digging his feet and skating across the ice. Chips of ice flew as he was towed across the ice floe rapidly, towards the freezing water! Every photographer leapt up to grab their cameras. By the time we got out on deck, the crew member had let go of the rope to avoid a potentially fatal dunking in that gelid sea. We took photos as he was left far behind in this icy wilderness while the boat was laboriously turned around and came back.

By then he had hammered home the peg that was to hold us for the night. They threw him a cable which he tied securely to the peg, then scrambled gratefully back on board. We drifted all night, tethered to the ice floe.

We returned to dinner. That night our meal was a culinary triumph with blanquette de veau and profiteroles with two kinds of icecream filling plus cream! We all abandoned our abstemious eating and gorged!

That evening we enjoyed a very lovely sunset. When I went to the back of the boat to capture this image the chef was out there smoking and drinking in the ethereal beauty of the scene. I tried in my broken French to compliment him on the delicious meal. God knows what I really said!

In the morning we began our journey south to a bay where polar bears might be found. The seas were very rough once we left the calming effect of the sea ice. I had to put on a patch again and lie down. We scanned for polar bears without success but saw eerily beautiful landscapes with splendid light effects. I thought this one worked well in black and white. 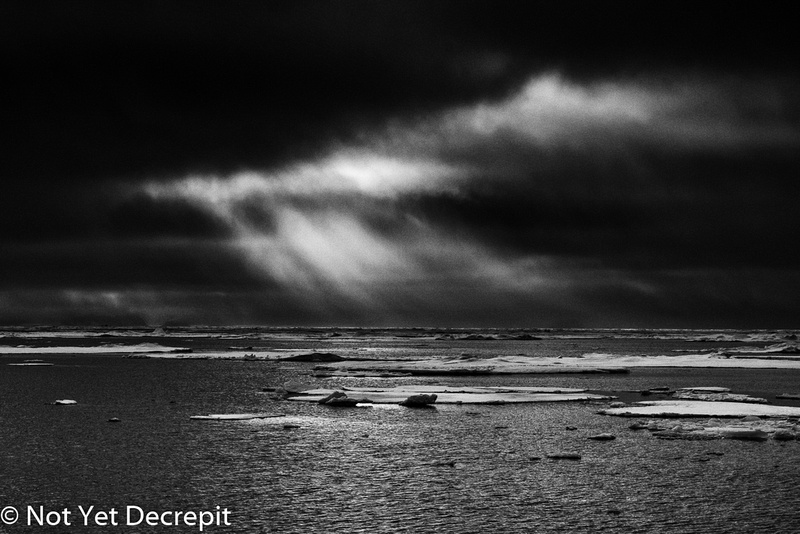 Later we saw a far-off storm which was dwarfed by the immensity of this stunningly beautiful landscape. 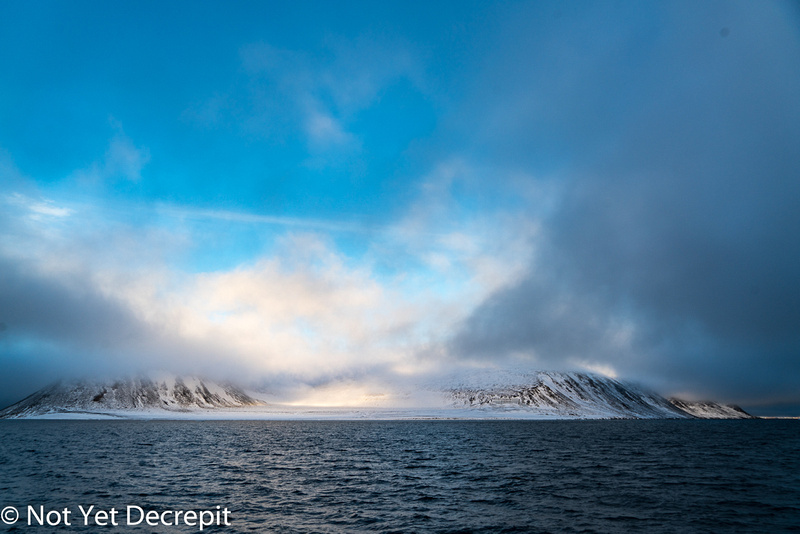 We went into Rijp Fiord which is not far from Greenland. After lunch, my husband retreated to read, saying he was tired of being cold. I gave him a lecture: 'You can read your book anytime but most likely we will never be in the Arctic again!!!' I dragged him out to drink in the wild beauty of the pristine landscape. 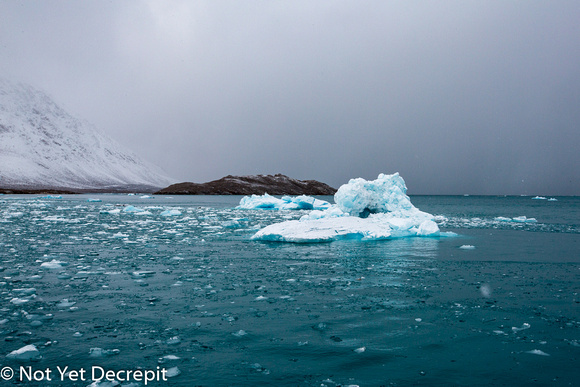 In the evening we headed south to Leiberfiord which meant going out to sea. It was a WILD night! The boat was plunging wildly, smashing into the waves, grinding through ice floes. Things were falling off shelves and coming loose, stuff was shifting around on deck and crashing against the cabins up there. 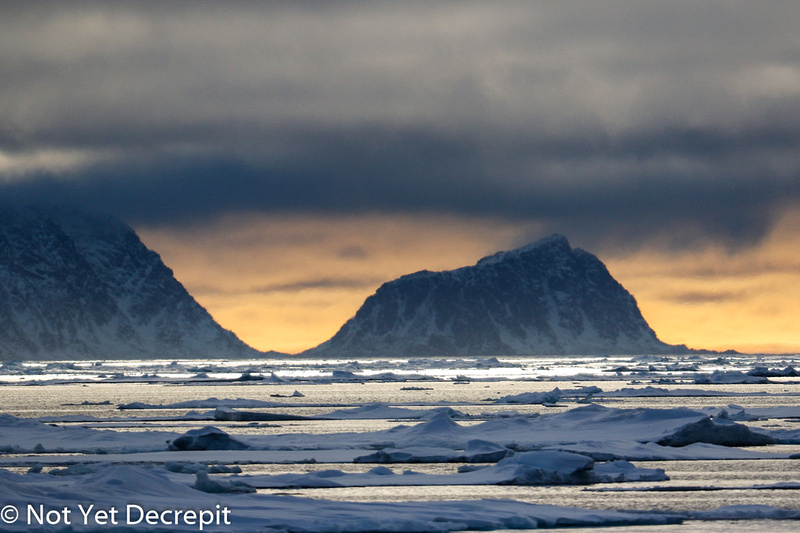 I was glad I'd had a queasy premonition and got ready for bed early. I've had a stroke which destroyed the balance nerve from the middle ear to the brain. I've learnt to balance using my eyes, but could never have kept steady on my feet! The others were upstairs having Krakens, a delicious hot chocolate and spiced rum drink they'd invented. I heard later that it was a battle for them to get down to their cabins as the boat heaved up and down. I fell into bed with every sort of seasickness meds I had. I found it particularly hard to bear when the waves became choppy and we started going sideways in a corkscrewing motion. In our bow cabin the scrunching was so loud that sometimes I feared we had smashed into one of these!

I survived the threat of seasickness thanks to all the meds. I’m pretty sure some of the others had a bad night - next morning we were amongst the first four in to breakfast which was a record for us! In a stunning bay we visited a trapper's hut with spectacular views, named 'Texas Bar'. 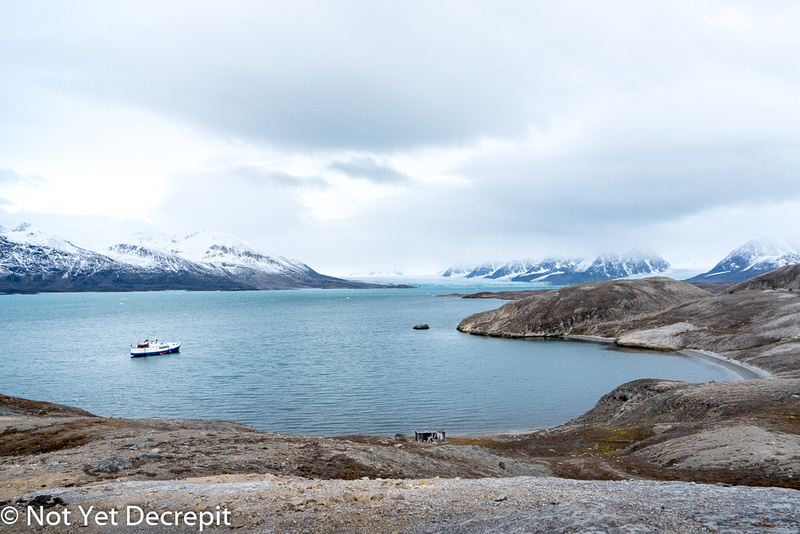 This tiny little outpost of a human presence in such a vast and stunning setting was set up with a picnic table out front and a scene of domestic bliss inside, even a washing line over the pot bellied stove. As a photographer, I was annoyed to find the distance from one side of the cabin to the other was so small that I could not show this in one photo.

We explored the area around the bay, finding rivulets making marvellous patterns upon the sand and admiring the spectacular views enjoyed by the trappers, in surely one of the most extreme, inaccessible places on earth. 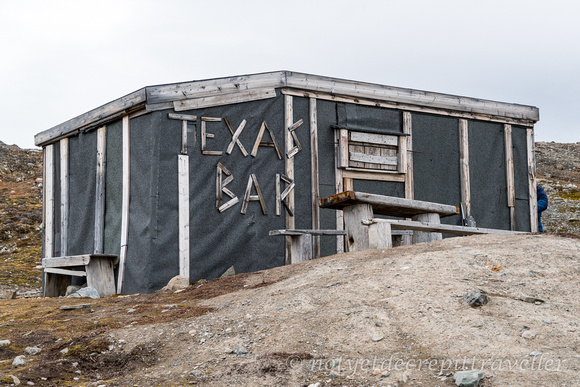 See if you can spot their cabin so tiny at the foot of the mountain in this image.

We walked to the cairn at the end of the promontory. I was happy to return to the boat. More able-bodied fellow explorers like these two gave me a hand to get down the shaley slopes to the shore before they hiked off to the glacier. 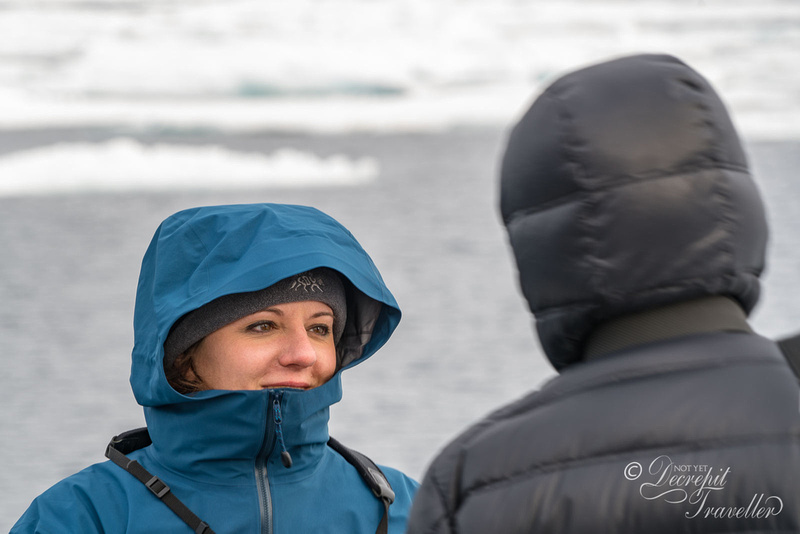 Not Yet Decrepit Traveller
Many thanks, Georgina, I'm so glad you think highly of my website and the photos! More to come, I've had a lot on lately but Africa is coming up next.
Georgina(non-registered)
You have a beautiful website!
Enjoyed reading enjoyed your photos even more!
Rozzie.aussie(non-registered)
Thank-you so much, Geri, I am very glad that you feel I have managed to convey a feeling for this forbidding yet supremely beautiful place.
Fuko Kawamoto(non-registered)
Hi Roz,
Amazing photos!!! Thanks so much for sharing the travel! Looking at the beauty of the nature,I forget where I am now......
Geri Clisby(non-registered)
Roz, simply stunning. The blog captures the essence of the beauty of this terrifying wilderness. Love the stories
No comments posted.
Loading...
Subscribe
RSS
Recent Posts
India - exploring Delhi Ranthambore Part 2 Tigers at the River Tigers of Ranthambore Tswalu, the Kalahari, Part 3 The Kalahari : Tswalu Part 2 Kalahari, Tswalu, Part 1 Mala Mala Sable Camp Part 1 Mala Mala Part 2; South Africa; Kruger National Park Tanzania - The Serengeti Part 2 Tanzania : The Serengeti
Keywords
photography Travel blog landscape travel arctic blog india walrus seal svalbard
Archive
January February March April May June July August September October November December
© Not Yet Decrepit Traveller
User Agreement
Cancel
Continue